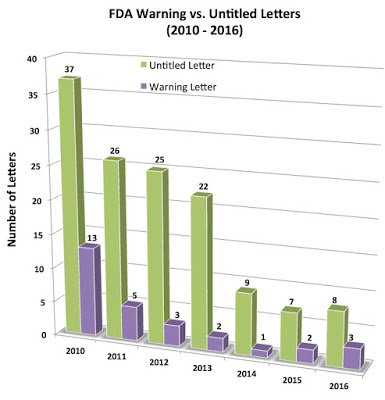 Just when you thought the FDA was finished issuing Warning and Untitled letters for 2016, it issued 2 more – both Untitled letters – last week, bringing the total issued in December to 6! The grand total to date is 11 letters, including 3 Warning letters.

I suspect FDA is responding to critical posts such as the one I wrote on 8 December 2016 citing a total of only 8 letters up until that date. A week later I had to update that (here) when the total reached 9 letters for 2016. I characterized that as a “slight uptick” in enforcement compared to 2015 when FDA also issued 9 total letters because there was one more Warning letter (3) in 2016 than in 2015.

That additional warning letter involved the promotion of a surgical irrigation solution promoted via email to healthcare professionals, which I don’t put in the same category as warning letters involving drugs that are ingested by consumers. I would also note that 2 of the untitled letters were severely criticized for arbitrarily citing a trivial issue (read, for example, “‘Judge, Jury and Executioner. Nice System,’ says Bob Ehrlich Sarcastically About Recent FDA Enforcement Actions“).

The two additional letters also do not have the same level of importance as letters typically issued by the FDA. Read on to learn why.

Both letters cite Youtube videos that are meant for healthcare professionals and are about “investigational” drugs; i.e., drugs not yet approved by the FDA.

One video, titled “Experts Discuss New Advances in Acromegaly”, for a drug by Chiasma, Inc., a U.S. privately-held biopharma company, was viewed a staggering 268 times! The other, titled “Saroglitazar Lipaglyn Mechanism of Action”, for a drug by Zydus Discovery DMCC, was viewed 11 times!

I’m not going to get into the regulatory details. You can access the letters on FDA’s site here and delve into the details.

There are several reasons why I think the FDA is dredging the bottom of the barrel so that it doesn’t appear to be lax on enforcement:

All this smacks of getting some last licks in before a new FDA commissioner takes over.