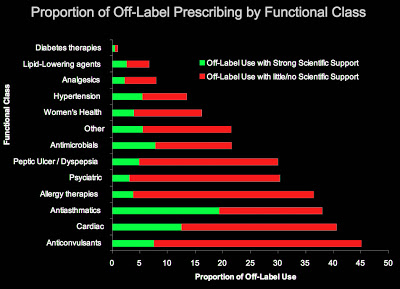 The FDA just issued new guidance on the the distribution to physicians of medical journal articles (reprints) on “unapproved new uses of approved drugs” by Rx drug marketers (see the “FDA Guidance Document“).

How is the FDA supposed to enforce this guidance? As Senator Waxman pointed out in a letter to the FDA back in November, 2007, “most reprints will be distributed by tens of thousands of drug and device representatives behind closed doors in physicians’ offices.” Obviously, the FDA is going to have to rely upon drug companies voluntarily complying because the guidance does not require drug companies to submit articles to the FDA prior to distribution.

Even if the FDA were to require pre-approval, it is unlikely that will actually “catch” violations such as the disclosure of authors’ financial ties to the drug company. Lack of “policing” seems to be standard operating procedure at the FDA, which government investigators say “does almost nothing to police the financial conflicts of doctors who conduct clinical trials of drugs and medical devices in human subjects.” Agency officials don’t even think such policing is worth the effort (see “FDA is lax on oversight during trials, inquiry finds“).

So, basically, off-label promotion of Rx drugs to physicians is now virtually unregulated as long as it is behind closed doors and via journal reprints (also see “Pharma’s New Marketing Partner: Medical Journals“).

But is there any harm in drug companies distributing off-label information to physicians?

“Of course the media, including those who do puff pieces on Sid Wolfe, will portray off-label use as inherently dangerous,” says Robert Goldberg over at Drug Wonks blog. “Most off-label uses wind up become standard therapy,” he adds (see “Off Label Gauntlet Tossed Down“).

Waxman, on the other hand, points out that “where the unapproved uses are actually ineffective, patients have been denied other, more effective treatments and have been unnecessarily exposed to the ineffective products’ known side effects.”

Just how ineffective are the drugs that are prescribed off-label?

I came across a 2001 study that found that “Most off-label prescription occurs without scientific support” (see here and chart below; click on the image for an enlarged view).

The authors claim, however, that this is no big deal — “Many off-label uses are not of great concern,” they conclude and “broad, unselective strategies to constrain off-label use would eliminate clinically beneficial evidence-based treatments.”

Note: This research was supported by a research grant from the Agency for Healthcare Research and Quality (AHRQ) (R01-HS013405). Merck and Company, Inc. and IMS HEALTH provided access to the data used in analysis. (Not that there’s anything wrong with that!)

Meanwhile, if you are interested, please take 2 minutes to answer a few short questions relating to the FDA’s Guidance for Good Reprint Practices for the Distribution of Medical Journal Articles… on Unapproved Uses of Medical Products.

If FDA were as Powerful as FTC