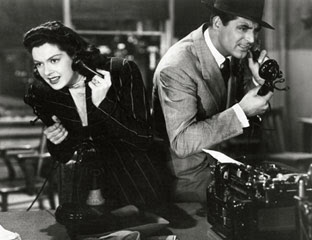 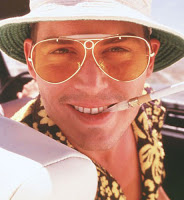 We were somewhere around Bethesda on the edge of Washington, DC when reality began to take hold. I remember saying something like “I feel a bit lightheaded; maybe you should drive…” And suddenly there was a terrible roar all around us and the sky was full of what looked like huge bats, all swooping and screeching and diving around the car, which was going about a hundred miles an hour with the top down to DC. And a voice was screaming: “Holy Jesus! What are these goddamn animals?”

That’s how I imagine my next road trip will be like on the evening of November 11, 2009, as I head down to the FDA’s public hearing on the “Promotion of Food and Drug Administration-Regulated Medical Products Using the Internet and Social Media Tools.”

I was thinking of wearing my Hunter S. Thompson Halloween costume to the meeting, but too many people told me they did not like the yellow Hawaiian shirt. It did, however, get me recognized at the recent ExL Pharma Digital Pharma meeting. Not that I needed it. When a panel member asked if Novo Nordisk’s Levemir-branded twitter account could be more effective, someone yelled out “Ask John Mack!” I think he read this: “Novo Nordisk’s Branded (Levemir) Tweet is Sleazy Twitter Spam!“

But I digress. I will have my 15 minutes of fame (literally!) at the November FDA hearing when I give my presentation in front of the DDMAC luminaries and the audience stuffed in the wifi-cell-phone-challenged meeting room of the National Transportation Safety Board Conference Center.

As luck would have it, some of my trade press competition – ie, Pharmaceutical Executive Magazine – was a bit tardy in posting a request to attend. “Just got shut down for a spot at the FDA social media forum. So much for trade press getting preferential treatment,” said @PharmExecMag in a Tweet. In this Web 2.0, Twitter world, if you snooze, you lose, is all I have to say.

Meanwhile, I made all my preparations for attending between September 19 and 21. First, I reserved a room at L’Enfant Plaza Hotel because that’s crucial. Even if couldn’t get a seat inside, I could still cause some trouble outside selling this T-shirt. BTW, I did notice a Holiday Inn nearby when I was in DC last week, but there are no rooms at the Inn.

Even before the Fed Register Docket was open for comments, I sent a snail mail letter to FDA requesting a seat. That was Sunday, September 20. One of my Twitter pals said he sent his letter by overnight FedEx. I wasn’t that paranoid, but I did call the FDA on Monday just in case.

When I called, Jean-Ah Kang, special assistant to DDMAC director Thomas Abrams, picked up the phone. After a few more calls, we became phone buddies. I asked her a lot of questions: about recording the meeting, whether or not there will be live webcasts, and if WI-FI access was available in the room.

Unfortunately, there will be no WI-FI or cell phone access in the meeting room, but you can go outside for that, Kang said. This reminds me of the Cary Grant movie His Girl Friday where reporters in fedoras rushed out of the courtroom and ran to the press room to call in their stories. There is a press room just outside the hearing room at the NTSB Center, but I haven’t been able to determine who can use this, what facilities it has, and why I would want to be holed up in there when all the action is happening up front in the court of public opinion!

There will be a live webcast, but that probably will not be archived. I’m thinking, therefore, of buying a digital webcam that can store up to 24 hours of hi-res video and a tripod so I can set up my video recording shop in the second row. Some trade press jerk in the 3rd row, however, is likely to make a fuss and complain that the camera is obstructing his view! In case that happens and I can’t use the video camera, I’ll record the audio with my handy SANSA MP3 player/recorder.

Instead of bringing all that AV equipment, I was thinking of switching to AT&T wireless and getting an iPhone because it can record up to 1 hour of video and I would be able to upload it immediately to YouTube. But that would mean I would have to run out of the room like Cary Grant to “file” my Youtube story in the middle of L’Enfant Plaza where presumably there’s a WI-FI hotspot. I would probably lose my seat though. Besides, the iPhone has a lousy mic. The new Verizon “there’s a map for that” ad ultimately convinced me to wait until I can get an iPhone on the Verizon network.

On one of my many calls to Jean-Ah Kang, I learned that only a few people were asking to make a presentation. I immediately volunteered to give a presentation summarizing the results of the survey I created on September 20 (see here). I submitted a request as specified by the FDA on September 30, 2009 (see http://bit.ly/JNsu4).

Jean-Ah assured me that I will be on the agenda, but I hope I don’t get bumped to make room for a speaker from Pharmaceutical Executive Mag. I don’t think that will happen, though. PE doesn’t make the news, it only reports it. I, on the other hand, have lead the fight for this public hearing (see “FDA, Tear Down This Wall! A Draft Petition Calling for a Public Hearing“) and that has become part of the news.

So I’m all set and ready for my repeat performance. Well, not exactly a repeat. I was a speaker at the 1996 public hearing (see “FDA and Internet”), but did not get 15-20 minutes solo time to speak and present slides as I will do this time.

This time, I predict a different outcome; namely, the FDA will publish some form of draft guidance before the end of 2010. This guidance may clarify only one of the many issues that concern pharmaceutical marketers. It may, for example, just deal with providing fair balance when space is limited – as in Google Adwords – or it may concern monitoring and reporting adverse events on social media sites. I am hoping it’s the latter, because I am very tired of hearing pharma marketers complain how FDA’s AE reporting requirements are hobbling their use of social media. FDA should do something about that so I won’t have to hear that excuse again!

Whatever the outcome, there’s sure to be fear expressed during the meeting and a lot to loathe about the snail’s pace of change afterward. Just watch out for those bats!

Marketing plan A for Plan B