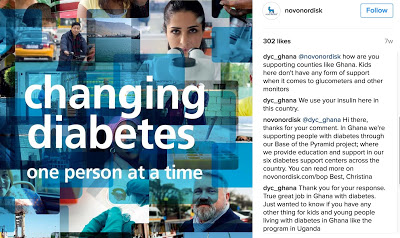 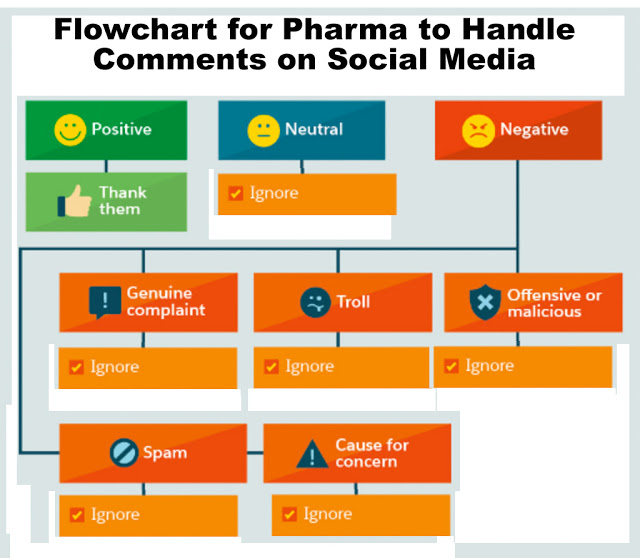 Philippe Kirby (@PhilippeKirby), Pharma Customer Engagement Ecosystem designer & developer @ Merck & MSD, asked “Is this a joke?” I respect Philippe’s opinion and have interviewed him about the “near future” of digital pharma back in 2013 (listen here), so I should respond to his question & hopefully stimulate some further discussion.

My quick answer to Philippe’s question is “yes and no.” Click “Read more” to see what I mean by that.

When I first saw this I chuckled, thinking how difficult it would be for a pharmaceutical marketer or even a Customer Engagement pharma person to implement this procedure. For most — not all — pharma companies,  engaging people via social media is a problem, which I have often written about. Actually, it’s several problems: (1) regulatory issues, (2) side effect reporting issues, (3) off-label promotion issues, but, most importantly, IMHO, (4) resource issues. Therefore, most — not all — pharma companies have a much simplified flowchart for dealing with positive, negative or neutral comments on social media and it probably looks more like my version than the version proposed by Jeff Bullas, who is not a member of the pharma marketing community as far as I know.

Some pharma companies have engaged with people via social media and followed at least one of the recommendations in the original flowchart. Astrazeneca, for example, once hosted a Twitter chat about “Rx savings,” aka drug prices (#rxsave) and dealt with several “Offensive or malicious” comments as well as comments that fall under “Cause for concern” (read “OMG! AstraZeneca Hosts Twitter Chat & World Does NOT End!“).

AZ, however, did not exactly follow the rules laid forth in the flowchart. For example, it simply ignored malicious comments; e.g., several people asked “the tough questions” about off-label promotion of drugs and Seroquel side effects, but everyone, including AZ, completely ignored them. So, AZ followed my chart in that regard.

Another example is how Novo Nordisk handled a comment that falls under “Genuine complaint” as shown in the following image (taken from my “Pharma on Instagram” slide deck):

In this case, Novo followed the advice in the original flowchart, which is “acknowledge how they feel” and “engage customer service.”

Further reading: “Dear Patient, Come to the ‘Dark Side’ & Engage with Pharma“