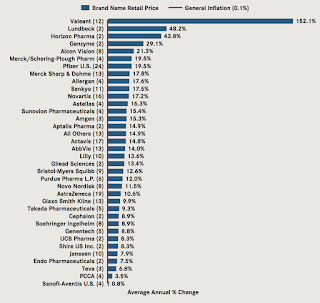 AARP’s Rx Price Watch Report: Trends in Retail Prices of Brand Name Prescription Drugs Widely Used by Older Americans, 2006-2015, shows that the average annual cost for one brand name drug used on a chronic basis now exceeds $5,800. Five of the six drugs with the highest cumulative price increases over the study period were marketed by Valeant Pharmaceuticals. The retail price of Valeant’s anti-anxiety drug, Ativan 1 mg tablets, increased by 2,873% between 2006 and 2015.

Which companies raised prices the most? Crooked Valeant, of course, tops the list. But can you guess who is #2, #3, etc? Click “Read more” for the answer.

I’m surprised the Lundbeck is #2 (see chart below). Out of the 48 companies assessed for their corporate reputation by patient groups in 2015, Lundbeck snagged third place, ahead of Johnson & Johnson, arguably the most beloved pharma company in the world (for more on that, read “Pharma’s Rep Among Patient Groups at 4-Year High“).