That’s because, when it comes to misconceptions about generic drugs, physicians score higher than consumers.

According to the “2006 Drug Trend Report” by Medco:

“The survey found that physicians trail consumers and pharmacists regarding their knowledge of and confidence in the safety and effectiveness of generic drugs which could have broad implications for the forthcoming boon in savings from the expected drug patent expirations of branded drugs worth over $40 billion in U.S. sales: 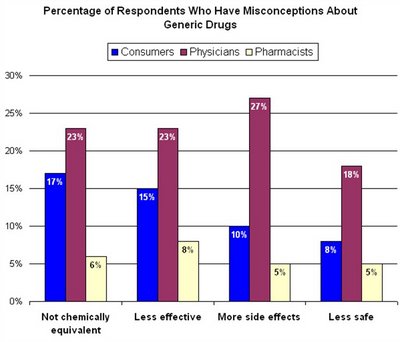 Pharmacists, on the other hand, know the score on generics.

The one distinguishing factor is detailing by pharmaceutical sales reps. Only physicians are detailed on the “benefits” of brand name drugs vs. generics by sales reps. Pharmacists are merely urged to stock enough drugs to handle the expected surge of prescriptions resulting from a sales campaign.

When a brand drug faces generic competition, a major goal of the reps’ “benefit” spiel to physicians is to cast doubt on the efficacy and safety of the generic equivalent. It appears that a substantial number of physicians swallow this spiel hook, line and sinker.

The drug industry spends $1 billion dollars per year on CME-accredited physician education, which can only mention drugs by their generic names. Despite that — or should we say because of that — doctors are still not educated when it comes to generics!

We shouldn’t expect CME (continuing medical education) sponsored by pharma companies to help physicians understand generics. Most of this support comes from companies with new Rx brands entering the market when generics are not available. The physician is being educated to link the brand name with the great benefits and safety profile being presented simply because only the brand name drug is out there being promoted by PR (see “Marketing Disguised as PR“).