Yes, it’s PhRMA Intern! Strange visitor from an Ivy League school who came to PhRMA with powers and ability far beyond those of Ken Johnson. PhRMA Intern! Who can change the course of mighty news stories, bend the truth at will, and who disguised as Emily Jameson, mild-mannered intern for a great pharmaceutical trade association, fights a never ending battle for believability, justice for pharmaceutical companies, and the PhRMA way!

Our story begins with an amendment latched on to the $31.7 billion Senate Homeland Security Appropriations bill by Sen. David Vitter, R-La. The proposal, which was approved 68-32, would create a Canadian loophole in the Food and Drug Administration ban on importing prescription medicine into the United States. (See “Senate Approves Rx Drug Import Plan“.)

“We should demand that (Customs and Border Protection) focus on the true priority that we face on the war on terror,” said Sen. Vitter of efforts to secure U.S. borders. “Stripping small amounts of prescription drugs from the hands of seniors …. that should not be a priority.”

She is torn by doubt exacerbated by “good” and “bad” angels arguing for and against importation of drugs from Canada.

An angel looking suspiciously like Sen. Vitter sits on one of Emily’s shoulders and links importation of drugs from Canada with the plight of seniors who are being sucked into the infamous Medicare “donut hole.” 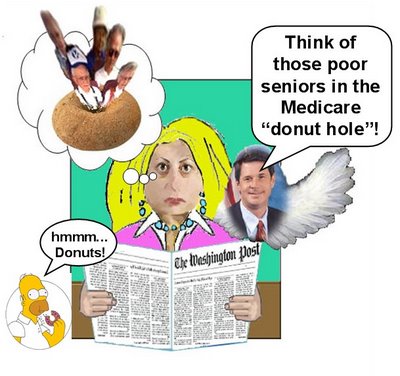 Alas! Emily’s vision is clouded by too much exposure to the antics of Homer Simpson. “I should have read up on Medicare Part D before starting this internship,” she muses.

However, Emily knows that most large pharmaceutical companies — many of whom are members PhRMA, her employer — deny the existence of the Medicare “donut hole.” A study, prepared by PricewaterhouseCoopers, LLP and commissioned by the Healthcare Leadership Council (comprised partially of PhRMA members including Abbott Laboratories, Amgen, AstraZeneca, Eli Lilly, GlaxoSmithKline, Johnson & Johnson, Merck and Pfizer), “shows that more than 90 percent of Medicare beneficiaries will either not reach the coverage gap or will have at least some coverage available to them in the gap” (see HLC Press Release).

[The study also indicates that 10% of Medicare beneficiaries are NOT enrolled in Part D and also 6% enrollees have chosen “enhanced” Part D plans and will have some (my emphasis) coverage in the gap. Eight percent (8%), the study claims, will have some spending in the gap.]

Meanwhile, a devil looking suspiciously like Peter Pitts, former FDA “Chief Messaging Officer” (aka, “mouthpiece”), takes up residence on Emily’s other shoulder and points out the perils of even small amounts of drugs imported by seniors (see “Counterfeit drugs and border security” and “Vitter Twitter“)… 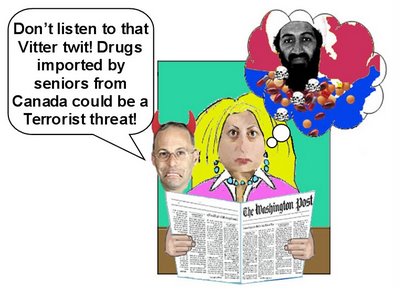 Some Senators have taken up PhRMA’s terrorist clarion call. This is how it was reported by EyeOnFDA:

Are seniors about to import drugs prescribed by terrorists? That is apparently and reportedly what some [have] said.

“If I were a creative terrorist, I would say to myself, ‘Hey, listen, all I’ve got to do is produce a can here that says ‘Lipitor’ on it, make it look like the original Lipitor bottle, which isn’t too hard to do, fill it with anthrax,” Gregg said. Quoted from the referenced article of Senator Judd Gregg (R- NH).

“Enough!,” shouts Emily. “These terrorists and their senior citizen ‘mules’ must be stopped! It’s time to change into PhRMA Intern!” 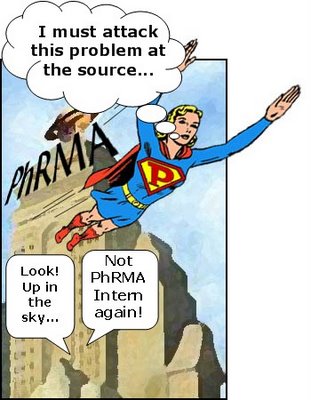 In no time flat, Emily changes into PhRMA Intern! and, in a single bound, leaps from PhRMA headquarters headed towards the Canadian border. A few minutes later she lands in a great metropolitan airport to greet arriving passengers. 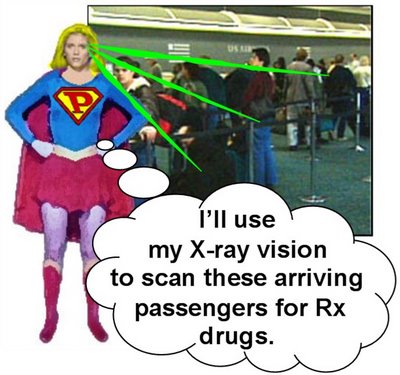 PhRMA Intern! scans the crowd and their baggage with her X-ray vision. Almost immediately she spots vials of little blue pills in the checked bag of a pudgy, middle-aged man. “No exactly a senior citizen,” notes PhRMA Intern!, “but close enough for me!”

PhRMA Intern! grabs Mr. Pudgy and immediately detains him and forces him to wear a prototypical terrorist orange jumpsuit. She is surprised, however, by counsel representing Mr. Pudgy… 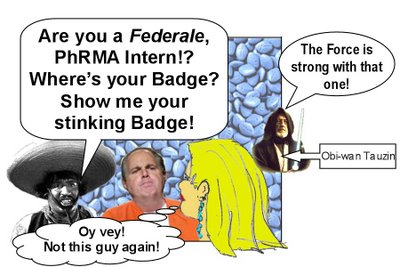 Also, she realizes that her navigation system may be faulty. “This doesn’t look like Canada to me,” she says.

How to Keep Up with PhRMA Intern!
To keep up with the Further Adventures of PhRMA Intern, subscribe below.

Public’s Confidence in Science Remains Steady Over 38 Years, But Not...