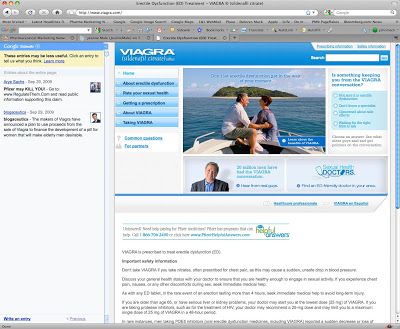 Have you heard of sidewiki? Sidewiki is Google’s new browser sidebar that “enables you to contribute and read helpful information alongside any web page. It is available as a feature in Google Toolbar” (You can find Google sidewiki here).

The “helpful information” Google is talking about is sidewiki entries that other people have written about the page. Anyone can write a sidewiki comment attached to any page on YOUR website and you CANNOT do anything about it! You cannot edit it and you cannot delete it, no matter how damaging it may be to you (unless it is obscene). Think of the implications for the pharmaceutical industry!

“If there are no entries,” says Google, “you can be the first to write one!”

Of course, I could not pass up the opportunity to be the first person to write a sidewiki entry attached to a major drug.com website! It took me only about 10-20 seconds to download the Google sidebar, which included sidewiki, and start using it.

It also took me only about 10-20 seconds to decide which drug.com wsbsite should have the honor of being the first to be graced with my sidewiki comments: www.viagra.com!

Here’s my very first sidewiki comment, which is now attached to the homepage of www.viagra.com:

COMMENT: I’ve tried Viagra and it caused my right arm to fall off! That would have been fine, except it also did not give me an erection!

How cool is that! A branded Tweet with a Twist!

If you have the new Google toolbar with sidewiki, you can view my comment when you visit www.viagra.com. You’ll have to click on the little sidebar arrow to open up it up and view it. I expect, however, that by the time you read this, Pfizer will have had a talk with Google and arranged to have my comments expunged (more on that below). So, here’s a screen shot I took today at 8:00 AM (click for an enlarged view): 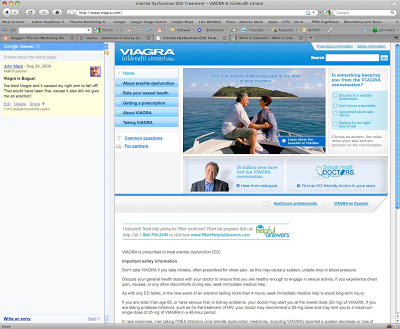 I did this to prove an obvious point: Google’s sidewiki allows any anti-pharma wacko to append unsubstantiated adverse events on any drug.com website.

So far, 1 out of 5 people reading my sidewiki have found it useful and 2 other people have submitted comments (shown in the screen shot below):

I note with a certain amount of pride that MY sidewiki entry is on the FIRST PAGE of the sidebar, whereas these others are relegated to page 2! “Sidewiki uses a quality algorithm and user ratings to determine the order of the entries that appear in the sidebar for a given page,” says Google. “The entries that are scored as being the most helpful and pertinent are more likely to display. Sidewiki entries with lower quality scores may not appear on the first page of the sidebar.”

BTW, the other 2 entries were written by people who I contacted directly or who follow me on Twitter where I ranted about this subject. You may remember Ayre Sachs as the “erectile projectile” man who was sued by Pfizer for trademark infringement (see  “Viva Viagra Missile Guy Vows to Continue His Quixotic Fight Against Pfizer“).

I learned about Google’s sidewiki from Steve Woodruff, who writes Impactiviti Blog (see “Google’s Sidewiki – Game-changer for Pharma Social Media?“). Steve and I had some back and forth conversation via Twitter about sidewiki and whether or not it was a “game changer.”

Is It a Game Changer?
No new technology is a “game-changer” for the pharma industry until zillions of people use it on a regular basis (or it just seems that way because pharma has been slow to understand how all new media is a game changer). I mean, how many people will ever see my comment? You have to be geek enough to download the Google sidebar and learn how to use it. For me, that’s pretty simple. But it’s not something your typical Web surfer would bother with.

Some of my colleagues remind me that we are talking about Google, a company that is used to having its software used by millions of people. Suppose millions of people started using sidewiki tomorrow? In my humble opinion, that would NOT bode well for the Internet as a powerful tool that consumers can use to find useful, credible health information. If you believe that pharmaceutical companies provide a good share of such information, then that information is in danger of being corrupted by wiki comments from people with an anti-pharma agenda — people motivated enough to use new technology like Google sidebar.

What was Google thinking when it developed sidewiki? It is thinking to put paid ads in that sidebar alongside the highest scoring sidewiki comments — ie, comments just like mine! Google’s scoring algorithm is agnostic when it comes to quality health information. I just proved that with my viagra.com wiki comment, which has a high score (so far).

But Google is forgetting that one of its biggest advertisers is the pharmaceutical industry. I am sure this industry is not going to be happy about how sidewiki can hijack their content and even perhaps allow competitors to post content or ads in the sidebar of their web pages. Google is biting the hand that feeds it.

Block It Danno!
I fully expect — and hope — that the drug industry will talk some sense into Google. The first thing the industry should do is to insist that Google make an exception for the pharmaceutical industry and allow it to block sidewiki from working on its websites. After all, if Google can carve out an exception to its rule against redirected URLs in adwords for drug.com paid search ads (see “St. Google Slays the FDA Dragon?“), it can carve out pharma URL exceptions for sidewiki. Case closed.