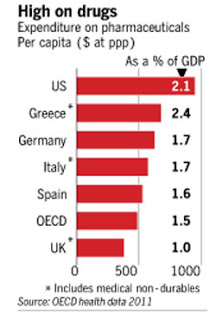 “Greece’s continuing high level of spending on medicines is a striking example of the broader problems facing the country as it battles under international pressure to cut public expenditure and rein in the nation’s debt,” say the authors of a Financial Times article (see “Athens struggles to rein in medical excess“).

If drug expenditure per capita and as a per cent of GDP is a measure of a country’s financial instability, then the U.S. is in the same league as troubled Greece (see chart on left).

“There were no controls on spending in the past, the whole system favoured consumption,” says the director for Merck, the US pharmaceutical group, in Greece. “It was not only supplier-led, but demand-led by doctors and patients.”

The same could be said of the U.S., the gold standard among health systems that “favor” consumption. But if that Merck pharma executive were to say the same about the U.S. system, he probably would be sent off to an “emerging” market such as Russia.

Drugs are Losing the Battle Against Heart Disease. Here’s Why.