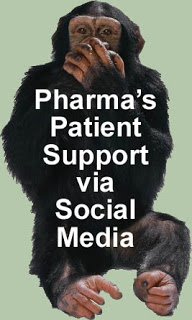 The pharmaceutical industry is not interested in using social media to inform or support patients using their products. It’s only interested in using social media to push out positive news about their companies and products. This is evident by the industry’s deafening silence regarding the shortage of cancer drugs such as methotrexate, a drug used to treat children’s leukemia among other maladies.

Letters from the American Society of Clinical Oncology, American Cancer Society of Pediatric Hematology/Oncology and Children’s Oncology Group, a nationwide network of researchers, were sent to top executives at four U.S. makers of the drug pleading for help. Two of these companies — Ben Venue Laboratories and Sandoz — are owned by major non-U.S. Rx pharma companies (Boehringer Ingelhein and Novartis, respectively). The letters state in part:

“As you know, since December we have seen a significant decline in the country’s production of preservative-free Methotrexate (MTX). This drug is critical to the treatment of children with ALL. Approximately 3,500 children and teenagers are diagnosed with ALL each year, with cure rates approaching 90%. Without this drug, patients are at dramatically heightened risk of dying.”

As reported in the Chicago Tribune (see here), “the FDA says the main reason for the shortages is manufacturing deficiencies leading to production shutdowns. Shortages also are resulting from companies halting production of drugs with low profit margins, companies consolidating in the generic drug industry and supplies of some ingredients shrinking.”

In November, 2011, Ben Venue Laboratories (Boehringer Ingelheim), for example, shut down its manufacturing and distribution operations at its site in Bedford, Ohio due to significant manufacturing and quality concerns (see here).

Meanwhile, the Twitter accounts of Boehringer and Novartis roll merrily along posting positive tweets about their commitment to cancer patients, while completely ignoring the cancer drug shortage issue. Here are some recent tweets:

The Rx drug industry is betting its future on developing complex biologics to treat major diseases such as cancer. If the current crisis is any indication about how successful they will be in (1) manufacturing biologics and (2) using social media to inform the public about the products and support patients who depend on these products, then, IMHO, I  doubt they will be successful.

P.S. Meanwhile, Boehringer is developing a Facebook “game,” Syrum, which is designed to “educate” the public on how the drug industry develops drugs (see “Pharma & Fun, Not Oxymoronic? Here Comes Gamification!“). I suggest the company’s PR people can better spend time and resources using Facebook to support their patients. Currently, BI’s Facebook page does not mention the drug shortage problem nor anything else that can be considered helpful to patients who take their drugs!

What would the Pharma Industry do without John Mack?