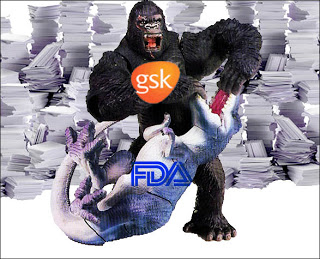 It seems that the 14 million pages of documents that GSK submitted to the FDA in defense of Avandia has had the intended effect: overwhelming FDA’s advisory panel with “science,” questionable as it may be.

I’m reminded of the scene in the original King Kong movie that fascinated me as a kid: the scene in which King Kong rips open the jaws of the T Rex and kills it. That’s exactly what GSK has done to the FDA — ripped open its regulatory jaws and rendered it powerless to take Avandia off the market even though it is known that the drug is responsible for the deaths of 400 times more people per year than is Toyota’s cars (see “If Drugs Were Like Automobiles“).

I have no doubt that the FDA will follow the recommendations of the advisory committee, the majority (17) of whose members voted to keep Avandia on the market albeit with stronger warnings or tighter restrictions on prescribing. Although 10 members voted to take the drug off the market, I don’t see that view being taken seriously by the FDA. After all, Avandia’s patent will expire within a year and it has received such bad press lately that it is hard to imagine physicians prescribing it. FDA’s strategy may be to slap restrictions on Avandia and hope it dies a death of a thousand cuts. That way, the agency can appear to be responsible and science-driven rather than being gung ho anti-industry.

All this leads me to consider how GSK will address the problem of a likely drop off in prescribing by physicians. This is already happening. GSK hopes to solve that problem with a clinical trial that demonstrates that Avandia is as safe (or just as unsafe) as its competitors. It is reported, however, that GSK is having problems recruiting patients for this new study.

Just as BP is hedging its bets on stopping the Gulf oil leak by placing a new cap on the well rather than relying on the success of the relief well option, GSK will roll out a direct-to-consumer (DTC) ad campaign to hedge its bet on the comparison study.

A DTC campiagn can be launched almost immediately and may already be ready to roll. Such a campaign may resemble the Celebrex campaign that Pfizer launched after competitor drug Vioxx was removed from the market and put Celebrex’s safety in doubt (see “Celebrex Ad: Let’s Dive Deeper“).

Keep in mind that DTC campaigns are aimed NOT just at consumers, but also at physicians who are even more likely to watch the evening news on TV than you or I. GSK may also simultaneously launch an equivalent direct-to-physician ad campaign.

The new Avandia advertising campaign will draw upon positive data that GSK cherry picks from its 14 million pages of documents just as the Senate Committee cherry picked negative data.

It was destined that the great Ape would die and so will Avandia. It won’t be the FDA gunships that kill Avandia, however. It will be the “beauty” of the marketplace!

Police Lieutenant: Well, Denham, the airplanes got him.

Carl Denham: Oh no, it wasn’t the airplanes. It was beauty killed the beast.

Will Viagra be Approved for Antidepressant-Related Sexual Dysfunction in Women?