Recently, I challenged pharmaceutical marketers to embrace Web 2.0 technologies and even to incorporate consumer YouTube-like videos in their direct-to-consumer (DTC) ads (see, for example, “YouPharma(tm): A Brave New World of Marketing?” and “YouPharma: New Rules for Pharma Marketing and Social Media“; BTW, take our online reader survey and get this reprint FREE!).

It now appears that GlaxoSmithkline (GSK) is the first pharmaceutical company to take me up on my challenge, albeit not in the DTC arena but as an unbranded, sponsored, Restless Leg Syndrome (RLS) disease-awareness YouTube video. 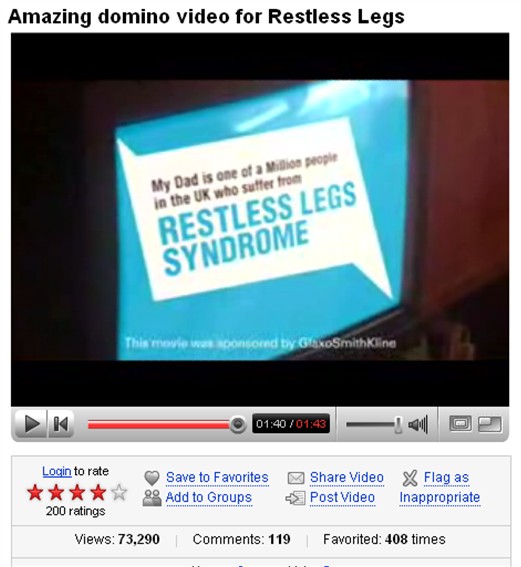 You can click on this image to see the video.

Actually, this video (“My Dad has Restless Leg Syndrome”), which has been viewed more than 73,000 times, was uploaded to YouTube in October, 2006. Therefore, I cannot claim credit for influencing GSK.

The sponsored message at the end of the video states that “My dad is one of a Million people in the UK who suffer from RESTLESS LEG SYNDROME.”

I’m not sure how much GSK paid for this YouTube video sponsorship, but 73,000 views is not too shabby. One has to wonder, however, who is viewing this video and what impression it is making.

Luckily, Web 2.0 allows us to get some insight into that question by looking at some of the comments the video has received. Most comments were about how cool it was:

But, there were a few comments mentioned RLS:

I never heard of this so excuse my ignorance. How exactly does it make you suffer to have restless legs? I imagine it is worse for a person in the same bed getting kicked all the time.

First, wow.﻿ Second, those are some restless legs. Third, the person that made this must have seen the video Japanese Dominos before they made this.

In my random sampling of comments, I did not find any that looked like they were planted by GSK marketers or their agents. I also did not find any product name mentioned in any of the comments.

At the very end of the video is the “money shot” — a URL where the viewer can go to find more information about RLS: www.legsinfo.com (ie, http://uk.restlesslegs.com/). The site recommends that you talk to your doctor about treatment. That’s about as close as you can get to providing treatment information to consumers in the UK. In the US, on the other hand, unbranded sites can link out to the product site.

How to Move This Into DTC Land
The dominoes video is indeed entertaining, much more so than that specially-designed chair in the ReQuip DTC TV commercials seen in the US. Could the video be adapted to DTC? It would have to be edited so that the product can be mentioned along with the benefits and fair balance side effect information.

Perhaps the dominoes can set off product messages at strategic points, not just at the end as in the current YouTube version.

Some dominoes could represent RLS symptoms being “knocked down.”

I wonder how the FDA would look at such an ad?