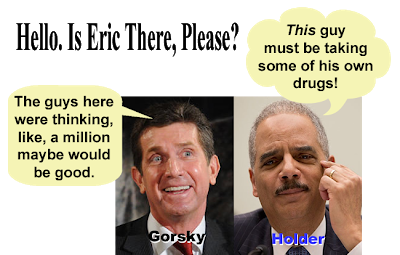 The Department of Justice (DOJ) just updated its commemorative poster highlighting the now seven highest multi-million/billion dollar settlements that drug companies have agreed to pay for inappropriately, and in some cases illegally, promoting prescription drugs.

The latest addition to the poster is Johnson and Johnson, which will pay $2.2 billion to the U.S. government to end civil and criminal investigations into kickbacks to pharmacists and the marketing of pharmaceuticals for off-label uses.

Johnson and Johnson CEO Alex Gorsky (on phone): Is Eric there, please?

Receptionist: May I ask who’s calling?

Receptionist: Did you say, “Alex” as in “Alexandra”?

(A beat as Gorsky is placed on hold. Music is heard—the Clash’s rendition of “I Fought the Law.” After a minute or so . . .)

Holder: Alex. Hey. That’s weird. My assistant said there was a girl named Alexandra on the phone.

Gorsky: No just Alex! There are a lot of guys who are named Alex, O.K.?

Holder: Yeah. We may be investigating him too. Just sayin’

Gorsky: So listen. I think we should meet.

Gorsky: No. For a business meeting.

Gorsky: Why? Would you ever want to have dinner?

Holder: It doesn’t have to be dinner. A walk would be nice. Maybe a coffee?

Gorsky: Both sound great. Let me tell you the reason I’m calling. A few of the guys over here—the board, for example—we’re a little concerned about some . . . money stuff. Like, that maybe you guys are still thinking of, uh, bringing charges against us.

Gorsky: Huh. And this is something you feel strongly about?

Gorsky: I see. And you have, like, evidence and stuff?

Holder: I can’t really talk about that, but yeah . . . like, boatloads.

Gorsky: Can I ask you a question? So you’re definitely suing us?

Holder: Can’t really talk about it.

Holder: Law school was a fallback. I had no idea what I wanted to do.

Holder: Is there a lot of science in your job?

Gorsky: So much. And I’m terrible at science.

Gorsky: Funny. What do you call twenty-five attorneys buried up to their chins in cement?

Holder: You guys paid all the taxes on foreign profits, right?

Gorsky: I’ll walk around the office some days and just see people crying at their desks for no outward reason.

Gorsky: Total change of subject, but would you ever want to go camping?

Holder: That was weird, because you read my mind. I have a two-man tent and, like, fourteen canteens.

(Both laugh for a long time.)

Gorsky: I was talking with some of the guys here and we were thinking, like, a million maybe would be good.

Gorsky: Were you thinking that would be a good number?

Gorsky: Oh. What were you thinking, hypothetically?

Holder: Hypothetically? Not less than Two.

Holder: No, BILLION. As in two-point-two billion.

Gorsky: Of course. Because a two million . . . I mean, my Park Avenue apartment is worth more than that . . . Anyway. Wow. So two-point-two billion.

Gorsky: So you feel like we were . . . were very bad, the guys and me, at the pharma company here.

Gorsky: Huh. That’s so weird, because we weren’t thinking that at all. We were thinking, you know, we made a lot of money and that was, like, good.

Holder: Interesting. I guess for me it’s how you made the money?

Gorsky: Not sure I understand. Why would that matter?

Gorsky: Yeah, that one. That’s funny, because we didn’t really take that very seriously, especially with regard to “off-label” drug promotion. We actually have a copy of it up on a wall and people kind of point at it and laugh, because, I mean, it’s just funny.

Holder: I think that’s where we differ a bit.

Gorsky: Interesting. O.K., then. Well . . . I should probably talk with some of the guys.

Holder: Talk with the guys.

[This spoof is modified from a New Yorker magazine “Shouts & Mummers” piece by John Kennedy. In that piece, Jamie Dimon, JP Morgan’s chief executive, is on the phone with Eric Holder.]