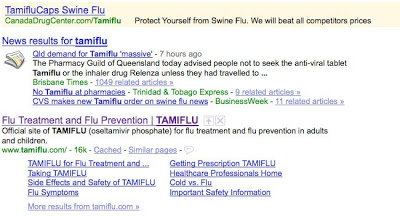 This week, the world is all a-Twitter about the outbreak of Swine Flu. Two stories caught my attention:

You can find the FDA press releases here and here, respectively.

In the first case, FDA is allowing vaccines to be used to treat populations (ie, children as young as 1 year) or to be “distributed to large segments of the population without complying with the label requirements otherwise applicable to dispensed drugs” (eg, without a physician’s prescription and by volunteers). This applies to Relenza (GSK) and Tamiflu (Roche).

Previously, FDA had issued a MedWatch warning regarding pediatric use of Relenza (see here). And previously FDA added an “abnormal behavior” precaution to the Tamiflu label (see here).

FDA noted that its Emergency Use Authorization of off-label use of Relenza and Tamiflu was made possible by Project BioShield, which became law in July 2004 (see “Bioshield Boondoggle“).

This is a classic case of balancing PUBLIC health benefit versus PERSONAL risk. That is, some small segment of the population may be at increased risk, but the general public may benefit. This would be a great topic for another discussion.

Right now, however, I would like to talk about drug advertising, which is the focus of this blog.

In the second FDA action mentioned above, Medimmune, the pharma company that makes and markets Flumist, was cited for a “reminder ad” that violated FDA regulations. “Specifically,” said FDA, “the ‘FluMist Now Available’ advertisements make such representations or suggestions about the use of FluMist, they are not considered reminder advertising and, therefore, are required to contain a true statement of information in brief summary relating to side effects and contraindications.”

It’s odd that this FDA action against a Flumist ad campaign was reported today by FDANews Drug Daily Bulletin. The date on the FDA “Violative Advertising and Promotional Labeling Letter” is February 23, 2009, which is probably the date the letter was sent to MedImmune. At the bottom of the Web page where this letter is reproduced, however, I find this: “Updated: April 24, 2009.” That’s probably the date that FDA made this public or posted the letter to its site. That probably triggered the FDANews report I received by email today.

The FDA’s timing of publicizing these actions causes me to think about the role of drug advertising during “health emergencies” such as this outbreak of Swine Flu.

If the FDA has authority to dispense with label requirements and allow off-label promotion of two anti-Flu medications, shouldn’t it also relax its restraints on broadcast and paid search reminder drug ads? Specifically, should the FDA allow Reenza, Tamiflu, and Flumist ads that mention the product name and what it treats WITHOUT the otherwise necessary listing of risks? After all, it has dismissed the risks to allow off-label use of at least 2 of these products.

Reminder TV ads can be produced quickly and at low cost and inform a large segment of the population — at least let them know about the availability of treatments. This might be useful in a health emergency.

PhRMA’s DTC guidelines, however, prohibit reminder TV ads. Even so, maybe PhRMA should give GSK and Roche dispensation allowing them to run reminder ads. (Medimmune, which obviously has NOT signed on to those “voluntary” guidelines, needs no dispensation.)

What about paid reminder search ads?

When I search Google for Relenza or Tamiflu, I find ads sponsored by Canadian pharmacies that claim “Protect Yourself from Swine Flu” (see below). If GSK or Roche sponsored these ads, the FDA would surely cite them as being violative, especially after it already cited 14 companies for running such ads back on April 2 (see “The 14 Letters. Who at the FDA Knew What and When? FDA Intern Wants to Know!“).

Luckily, in this case, the brandname drug sites are top of the list in the natural (unpaid) search results, so this may be a moot point. But allowing third parties like Canadian pharmacies to get top billing on search pages AND to make outlandish claims such as “Protect Yourself from Swine Flu” doesn’t seem right. What do you think?