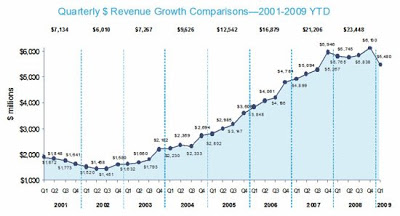 As reported by eMarketer, “according to the Interactive Advertising Bureau (IAB) and PricewaterhouseCoopers (PwC), total online advertising revenues in Q1 2009 fell to $5.48 billion, down 10% from the previous quarter and down 5% from Q1 2008” (see “Internet Advertising Revenues at $5.5 Billion in Q1 ’09” and chart below).

This downturn was a “surprise” to eMarketer, which said “many pundits thought that digital advertising would not dip into negative growth because it was less expensive and offered more measurability than traditional media channels” (see “Surprise: Online Advertising Down“).

Perhaps the 2008 fourth quarter uptick caused these pundits to believe that the trend would continue into 2009. It’s more likely that that increase was due to the “spend it or lose it” syndrome; ie, spend what’s in the budget so that next year’s budget won’t be adjusted downward to reflect what was spent in the previous year. I suspect that the 2009 budgets of online advertisers have been cut back anyway and this is why there was such a sharp decline in the first quarter. It’s likely the decline will continue in the second quarter and perhaps move up a bit in the 3rd and 4th, but nowhere near enough to make 2009 a better year than 2008 overall.

Why all the surprise? Didn’t eMarketer report that search engine marketing was down 11.5% in the first quarter of 2009? Based in that data I said “I doubt that 2009 will see an overall increase in pharma ad spending online”(see “Online Advertising Growth Slows in 2008, Search Declines in 2009“).

If you’re in the business of online advertising, you don’t need an eMarketer or IAB to know which way the wind is blowing. It ain’t blowing at all!