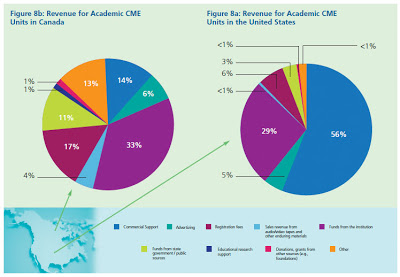 “You know that CME [Continuing Medical Education] is in a bit of trouble when its longest-serving provider is hanging up its accreditation credentials and stepping out of the game,” says James Chase, Editor of MM&M magazine (see “Credit where credit’s due“).

The “longest-serving provider” mentioned by Chase is Postgraduate Professional Services (PPS), which is a special kind of CME provider: a MECC, shorthand for Medical Education Communication Company. MECC’s are independent profit-based companies many of which have been set up by advertising/marketing agencies. MECC’s were a convenient way of establishing a “firewall” between the agency’s promotional side and it’s medical education side. OIG and ACCME demanded that pharmaceutical companies establish such “firewalls” between marketing and physician education.

MECC’s are having a hard time and they blame it all on regulations such as the one I just cited.

“The CME enterprise has gotten bogged down in disputes, misconceptions and misguided regulatory initiatives,” charges Jon Bigelow, president and CEO of KnowledgePoint360, which owns PPS. “Many of pharma’s critics have gone to illogical extremes that will hurt the healthcare system and patient care. In this environment, neither supporters nor providers can plan effective activities to meet the long-term needs of busy practitioners.”

Will the healthcare system in the US be “hurt” if all for-profit CME providers went out of business?

To answer that question, I accessed a survey that Chase cited in his editorial: the 2008 AAMC/SACME Harrison survey. One of the survey’s conclusions was that 121 out of 145 commercially-supported (ie, pharma-supported) CME activities offered by the average medical school would not have been offered without this support. The average school offered 147 CME courses, which means that 99% (145/147) of medical school CME courses are commercially supported. In fact, 54% of the revenue for academic CME in the US comes from commercial support.

The situation is different in Canada. There, only 14% of academic CME revenue comes from commercial sources (see chart; click on it for an enlarged view).

I don’t see how Canadian healthcare has been hurt by this lack of commercial revenue for academic CME.

But MECC’s, which are in competition with medical schools that have their own CME departments, are being hurt. Perhaps most MECC’s can go out of business and it would not affect the academic CME community much. [The mean pay for an academic Director of CME in the US is $80,000, according to survey cited above. At that salary level, academic CME departments probably would have no problem hiring out-of-work MECC personnel.]

Not too long ago, Pfizer announced that it will no longer directly fund CME courses provided by for-profit, third-party companies (ie, MECC’s) although it will keep paying for courses offered by med schools, teaching hospitals and medical societies (see “Pfizer to stop funding for-profit CME“).

That’s when PPS’s fate was sealed. According to KnowledgePoint360 Group/PPS’s LinkedIn page, the company’s employees are well connected to Pfizer! Maybe, too well-connected I would say.

Whether or not bypassing MECC’s will eliminate bias in commercially-supported CME is open for debate. The following are some comments about Pfizer’s decision received so far from the ongoing survey: “What’s the Best Way for Pharma to Sponsor CME?“

[I invite you to take that survey here. Afterwards, you will be able to see a summary of the de-identified results to date.]
Some comments from survey respondents:

“Maybe Pfizer was working with the wrong for-profit, third-party company [JM: PPS?]. There are a lot of honest for-profit, third-party companies. I find that most pharmaceuticals reps focus on sales and are not aware of the guidelines or do not know how to set boundries. As a MECC I inform them of the guidelines and I work at keeping informed i.e. OIG, FDA, ACCME, Stark Laws etc etc etc. It’s a job just trying to interpret all those requirements and then try to figure out the pharma’s own internal guidelines. Does it really matter where the money goes if spot checks are not done to determine if a CME provider is including marketing with educational materials i.e. print material that are the same color as the product packaging etc. I think that ACCME should include some marketing people in there site visits.”

“It’s probably easier for Pfizer to use this model because the for-profit, third party companies are the gray area. However if the argument is that courses paid by the pharma industry are biased simply because they are company funded courses, then it really doesn’t matter if a med school, teaching hospital or medical society provides the eduction. They would be inherently biases because of the funding. Non-profit does NOT equal unbiased.”

“I don’t see any evidence that med schools and societies are any less biased or less beholden to pharma dollars.”

“The Pfizer response is a last resort. Medical societies and med schools are motivated by revenue streams to a significant degree and will be subject to significant influence once the magnitude of funding and competition for these unrestricted grants increases. In addition, med schools and societies are not currently capable of providing an adequate volume of CME courses/materials to satisfy the current need. It will take several years to build up capability. Once an institution makes a significant investment in staff and infrastructure, the need to continue to attract large amounts of grant money to support the CME operation will create the a real potential for programs that are not completely independent. In addition, societies and medical schools have complex relationships with pharmaceutical companies since they partner in both clinical and preclinical studies. These relationships could result in unintended influence on CME programs. Until the learner drives the financial process, truly independent CME will not be achieved. Since physicians are often reluctant to finance their own education, perhaps pharmaceutical companies could (as a group) fund a large independent foundation that could provide financial “assistance” equally to all physicians who could then individually choose (and pay for) courses and materials based on content and quality. This would encourage physicians to participate in CME programs while preserving the competition between commercial CME providers that drives innovation and quality and removes pharma funding from the provider side of the equation.”

“Since MECCs are in the business of CME, they often are the most up to date on changes and have greater resources to ensure that programs are in compliance. Med Schools, etc. often have only one small office which manages hundreds of programs per year which cannot keep up with industry best practices, etc.”