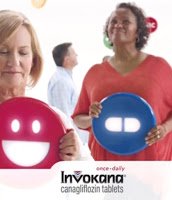 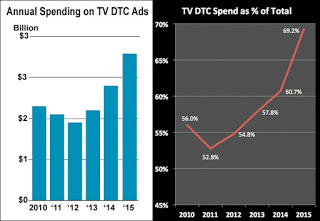 2014 was a banner year for TV direct-to-consumer (DTC) advertising in that it saw the highest percentage spent on TV since at least 2001 (see chart and read “Pharma Ups Its Investment in TV DTC Advertising“).

A few weeks ago I said “Forgettaboutit! The numbers are not yet in for 2015, but if it’s anything like 2014 — and judging by personal experience — the drug industry will be spending even MORE money on TV DTC ads.”

My answer: No! How do I know? Click on “Read More” after the insert below for my analysis of TV DTC ROI (return on investment).

Analysis of TV DTC ROI
According to Beth Snyder Bulik writing for Fierce PharmaMarketing “However, it [the money Johnson & Johnson spent advertising Invokana on TV in 2015; $101.2 million] might have been money well spent. U.S. sales of Invokana spiked upward with J&J reporting $348 million in fourth-quarter revenue for the brand, up 80% when compared with the $193 million in U.S. sales for the same quarter of 2014” (“New brands, stepped-up spending drive big TV-ad outlay for diabetes in 2015“).

We must assume that marketing to physicians (lots more $ is spent on this marketing) and other forms of DTC advertising (e.g., print) also played a role in increasing Invokana sales. I think it would generous to say that DTC TV ads were only responsible for 40% of the increase in sales; i.e., $62 million. That would mean the TV ad ROI is more like ($62 million)/($66 million) = 0.9 (J&J made only $0.90 for every dollar spent on TV; negative ROI); i.e., a losing proposition!

This is not to say that all DTC TV ads have a negative ROI. But, for some brands – and Invokana may be one of them – DTC TV advertising may not be the best way to spend your advertising dollars.

P.S. Perhaps the Invokana ads themselves are to blame. The people in them look like zombies!