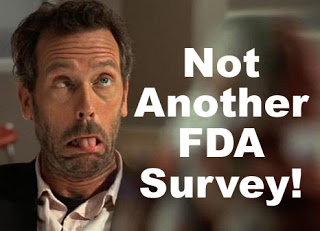 The FDA is planning on spending $364,588 to field the “Healthcare Professional Survey of Prescription Drug Promotion” (see “FDA Gets Go-Ahead for Study of DTC Advertising and Social Media“). According to the FDA public notice (here), this survey is designed to “explore the opinions and perceptions of physicians, nurse practitioners, and physician assistants with regard to the promotion of prescription drugs to consumers and healthcare providers.”

In 2002, FDA considered this form of promotion “sufficiently important as a force in the physician-patient interaction” that they surveyed both patients and physicians regarding their perceptions of DTC advertising (see results here). Now, nearly a decade later, the FDA says “there are critical reasons to return to the field to gather more evidence on the influence of DTC advertising in the examination room and on the relationships between healthcare professionals and patients.” The major “critical reason” is the role now played by various “physician extenders”: i.e., nurse practitioners and physician assistants. Physician extenders can also prescribe drugs and the drug industry would love to learn more about THEIR attitudes.

Over the years the FDA has proposed and run several such studies (see, for example, here, here, and here). Each time it asks for public opinion to assess “whether the proposed collection of information is necessary for the proper performance of FDA’s functions, including whether the information will have practical utility.”

I don’t recall seeing any comments that questioned the necessity of these studies and that is the case with the current study. In fact, most comments are “supportive” of such studies. Merck, for example, says it is “supportive of FDA’s efforts to gather more evidence on the influence of direct-to-consumer (DTC) advertising and prescription drug promotion on interactions between patients and their healthcare professionals.” Other comments from healthcare professional societies simply complain, hey, why aren’t our members (e.g., pharmacists) included?

And why wouldn’t these stakeholders be “supportive?” Most results of FDA studies such as this one yield more positive results for the drug industry than negative ones. Very few healthcare professionals are going to admit that advertising ADVERSELY affects their clinical decisions. Most would say it has no effect at all and many would say it has a positive effect; don’t forget all the money many physicians have received from the drug industry (see “Pharma Pays Out $327 per Doc in UK vs. $302 per Doc in US“), which they also say does not influence their prescribing habits.

So, is the FDA spending our “sequestered” tax dollars on research that benefits patients or the drug industry? It’s not just the $364,588.99 cash spent — it also involves numerous FTEs and time to manage the study and promote the results. Factor in the labor costs and this study could cost us a cool million! BTW, I don’t think the FDA collects any “user fees” from the drug industry to cover these costs.

Another effect of studies like this is to delay any real regulatory action such as the issue of new guidance (see, for example, “FDA’s Proposed Web Study Will Further Delay Social Media Guidelines“), which is the REALLY IMPORTANT job of the FDA.

I am Off to London to Meet Some EU ePharma Pioneers...