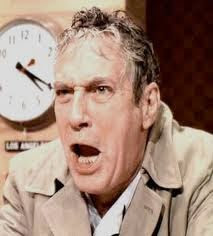 Sensing that there are a lot of pharma marketers out there who are “angry as hell and don’t want to take it any more,” I decided to host a short, VERY anonymous survey seeking opinions about FDA’s recent letter to Novartis regarding its use of metatag text in a Facebook Share button (for background,  see “Implications of FDA’s Warning Letter to Novartis Regarding Facebook Share Widget“, “Who’s in Charge of Your ‘Invisible’ Metadata? WARNING: Don’t Invoke the ‘Invisibility Rule’“, and “Update on FDA Regulation of Pharma Metadata & Impact on Search“).

My timing could not have been better!

Yesterday, the big story coursing through social media was NOT FDA v. Novartis, but the story of how JetBlue attendant Steven Slater decided he had had enough. He cursed off his passenger nemesis via his plane’s PA system, grabbed a beer, and exited via an emergency escape chute. I, among many other people, tweeted about it positively:

“Wouldn’t we all love to pull the shute (sic) lever & escape into adventure like this JetBlue flt attendant? http://nyti.ms/bh2deF“

This plus the Tea Party movement may signal a new era of “had enough bullshit!” Which is good way to describe the comments I have collected so far in my little survey. The following is just one example:

“It’s bullshit. The issue is not the metadata but the truncating of the data that will occur through any number of sources – and one that you correctly point out is natural search. This is a very slippery slope where the FDA should provide some options. It’s a bait and switch that they listen to us and then crush us. What do they have against Novartis? Feels like they’ve been picking on them lately.”

You can find this comment and others here and take the survey yourself here (it’s completely ANONYMOUS; no names or IP addresses are collected).

Needless to say, I have my own opinions on this and have stated a few in the posts I have cited. But the responses to my survey open up new issues that I plan to use in a future debate to be aired LIVE on my Pharma Marketing Talk Blog Talk Radio Show. More on that later.

Alex Butler’s Signature Says It All — Well, Almost All.