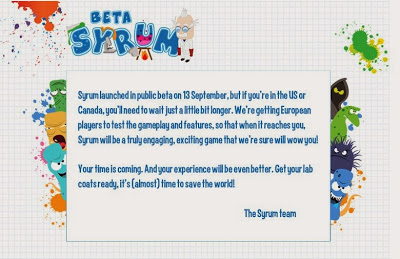 “Gamification” was a buzz word flitting around pharma circles (but not Google+ circles) a year or two ago. As an example, everyone I know in Pharma Twitterdom was enamored by the launch of Boehringer Ingelheim’s SYRUM FaceBook game, launched in September, 2012, but ONLY to European users (see here and here).

We here in the U.S. — BI’s largest market — are still waiting for SYRUM. BI’s John Pugh — Director of Digital Communications and the developer of SYRUM — promised it would be launched in the U.S. sometime in 2013. There’s still a chance of this happening, I suppose. But I would very surprised if it does. In the small world of pharma watchers and waiters, it’s akin to waiting for FDA’s Internet/social media guidelines.

I visited the Syrum FB page (here) this morning to see if I could find more information about when the game would be launched in the U.S.

When I clicked on the Play Game button, up popped the above notice, which said we in the U.S. and Canada would have to wait “just a little bit longer.” Funny thing, though. That notice itself dates back to September 2012 when the beta version of the game was first launched; i.e., the “13 September” date on the notice actually refers to September 2012, not 2013. So, don’t be fooled into thinking that Syrum was just launched about 45 days ago. It was launched about 410 days ago!

BI continues to update the U.S. Syrum FB page with trivia about the game and some fun science facts and projects. The most recent update, however, was August 1, 2013 — over two months ago! Clearly, this is not an important endeavor that requires constant attention and that’s why the page has garnered only 422 likes. What’s to “like”?

BI says it is testing SYRUM in Europe so that “when it reaches you [U.S. and Canada], Syrum will be a truly engaging, exciting game that we’re sure will wow you!” 410 days is a long time for a beta test — much longer than it will take the Department of Health and Human Services to fix the Health Exchange site, which is a much more challenging problem than anything a simple game web site can have.

The delay is disappointing, of course, but it also sends a message to other pharma companies, which is “this may be harder than we thought and probably is not worth the effort.”

Are You Serious?TM A Good Example of Why Pharma Brand Managers...