After watching a 60 Minutes show that featured a story on a book titled “On Bullshit,” I just had to go out and get the last copy in my local bookstore, especially since the commentary also noted that marketing is one of the most notorious sources of bullshit.

The book, which is a 67-page tongue-in-cheek treatise, was written by one Harry G. Frankfurt, a Princeton University professor of philosophy. Frankfurt, who is well-known in academic philosophy circles but probably unknown to you, makes a distinction between liars and bullshitters.

The idea that marketing is somewhat less than truthful should not surprise anyone. Some people would even claim that marketers are liars. For example, Seth Godin, author of the book “Permission Marketing: Turning Strangers Into Friends And Friends Into Customers,” which was previously reviewed in Pharma Marketing News (see “Out-of-the-Box Marketing: Will It Work for Pharma?”, PMN Reprint #27-02), has written a new book titled “All Marketers are Liars.” The book is scheduled for release on May 23, 2005. According to one reviewer, “this is a book about doing what consumers demand—painting vivid pictures that they choose to believe.” Sounds like bullshit to me!

Carefully Wrought Bullshit
Frankfurt puts marketing into the category of “carefully wrought bullshit.” According to him, “the realms of advertising and of public relations, and the nowadays closely related realm of politics, are replete with instances of bullshit so unmitigated that they can serve among the most indisputable and classic paradigms of the concept.”

The important point is that all marketers are NOT liars. All Marketers are Bullshitters! One wonders if Godin’s book will sell more with that title, but I don’t think so. It would lose its shock value because everyone knows that marketers are bullshitters and, what’s more, everyone expects bullshit from marketers. Lying, however, would be shocking and even illegal! The distinction, therefore, between lying and bullshitting is critical from a pharma-ceutical marketer’s point of view, not to mention the FTC and FDA.

The Essence of Bullshit
The difference between a bullshitter and a liar, claims Frankfurt, is that the bullshitter has a complete disregard for facts. “His eye is not on the facts at all, as the eyes of the honest man and of the liar are, except insofar as they may be pertinent to his interest in getting away with what he says…this indifference to how things really are—that I regard as of the essence of bullshit.”

A good example of this is how Merck instructed its sales force to bullshit their way around questions by docs about Vioxx.

At a recent Congressional committee hearing, confidential Merck documents were released that provide details about how Merck aggressively cast Vioxx in the best possible light before it was pulled from the market because of cardiovascular risks.

“When doctors asked about those risks,” according to a May 6, 2005 AP story, “the Merck sales reps were to refer to a ‘cardiovascular card’ with data suggesting that Vioxx could be safer than other anti-inflammatory drugs. Yet the card… doesn’t include the very study that raised the first warning signal that Vioxx could harm.”

In other words, the reps were instructed to paint a picture that perhaps the doctors wanted to believe—i.e., they engaged in some “carefully wrought bullshit.” The Merck marketers were not lying and their eyes were definitely on the facts, just not the right facts. This, as Frankfurt would say, is the essence of a bullshitter.

The bullshitter “does not reject the authority of the truth, as the liar does, and oppose himself to it. He pays no attention to it at all,” says Frankfurt. “By virtue of this, bullshit is a greater enemy of the truth than lies are.”

Although bullshit, according to Frankfurt, is produced “without concern for the truth, it need not be false. The essence of bullshit is not that it is false but that it is phony.” Got the distinction yet?

All Brands are Bullshit
Frankfurt looks at the motives of a liar and a bullshitter to help delineate one from the other. Whereas the lair is trying to deceive, the bullshitter is not. The bullshitter doesn’t care about the truth. “What he cares about,” says Frankfurt, “is what people think of him.”

If the brand personifies the marketing message, then the brand is the bullshitter. The marketer strives to build a brand that is trusted by the consumer, that is well thought of, that impresses the consumer. That is what matters. The brand, therefore, is bullshit.

The Marketer as Bullshit Artist
Frankfurt suggests that there are “exquisitely sophisticated craftsmen”—although later on he calls them artists—in the realm of politics and marketing “who—with the help of advanced and demanding techniques of market research, of public opinion polling, of psychological testing, and so forth—dedicate themselves tirelessly to getting every word and image they produce exactly right.” Sound like anyone you know?

Advertisers often reward themselves with prestigious awards for creativity. This is an appropriate accolade for the bullshitter and his or her product, because the creativity upon which bullshit relies, says Frankfurt, “is less analytical and less deliberative than that which is mobilized in lying. It is more expansive and independent, with more spacious opportunities for improvisation, color, and imaginative play.”

That is frequently how marketers and advertisers describe their product. Just look at the Viagra “devil Bob” ad that was pulled from the market not too long ago. This is what Kelly Simmons, executive vice president and chief creative officer at Tierney Communications in Philadelphia, who studies sex issues in marketing, had to say: “I like the new tone; I think it’s playful.” (See “The Two Bobs: Enzyte vs. Viagra”).

Bullshit is a matter of art and marketers think of themselves more as artists than as craftsmen. In other words, they see themselves as “bullshit artists.”

Why Is There So Much Bullshit?
Frankfurt contends that there probably is no more bullshit today, relatively speaking, than at other times. It’s just that there is more communications of all kinds today.

The pharmaceutical industry has been guilty of increasing communications to doctors and consumers to such a degree that the bullshit level, like the level of spam in your e-mail inbox, has reached such a height that it cannot be ignored and is no longer tolerated (see FIGURE below). That is why doctors won’t let sales reps into their offices anymore and why lawmakers are proposing bills to limit DTC advertising.

Pharmaceutical marketing bullshit could be lessened either by cutting back on all forms of marketing communications to doctors and consumers, which would lead to a depression in our industry, or by decreasing the amount of bullshit in those communications. The critics in Congress will force the former solution upon the industry unless pharmaceutical marketers volun-tarily adopt the latter. 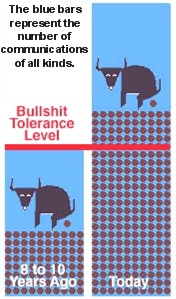 FIGURE: The relative amount of bullshit in pharmaceutical marketing communications may be the same today as it was 8 to 10 years ago before DTC advertising burst upon the scene and pharmaceutical companies dramatically increased their sales forces. The absolute level of bullshit today, however, far exceeds the tolerance level of docs and their patients.

MACK’s MARKETING BS MAXIM
If the percentage of bullshit in marketing communications were decreased, pharma marketers could still maintain or even exceed the current level of communications with their audiences and not exceed their BS tolerance levels.