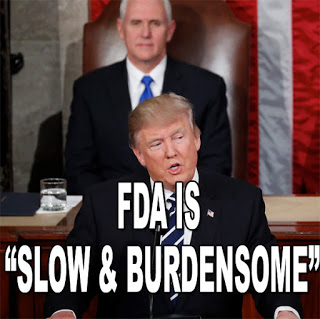 Last night, President Trump called on the FDA to speed the approval of drugs to treat life-threatening diseases, “deriding the agency’s current process as ‘slow and burdensome’,” according to this STATnews article.

One solution to alleviating FDA’s “slow and burdensome” approval process and getting potentially life-saving drugs to patients is “Right to Try” laws that would allow people with fatal illnesses to gain access to experimental medicines, even though they are not enrolled in a clinical trial.
VP Pence and other lawmakers support this approach (see here).

“We should reform FDA so it is approving drugs after their sponsors have demonstrated safety and let people start using them at their own risk,” said Jim O’Neill, a managing director at Mithril Capital Management, a venture capital firm run by Peter Thiel, the billionaire Trump donor and transition team advisor and candidate for FDA Commissioner (see here). “Let’s prove efficacy after they’ve been legalized.”

I decided to ask my readers if they think this is a good idea or not and to also submit comments to support their views.

So far, I’ve received nearly 50 responses to my survey and more than 30 interesting comments, some of which I share with you here. I invite you to take the survey and give me your opinion as well.

About 56% of survey respondents think Right to Try is a good idea and 42% think not. Only 1 person was “Unsure” who offered this insightful comment:

“There would be merit in allowing patients earlier access to experimental medicines (provided they have been shown to be safe) as delaying their access until clinical trials are complete is potentially unethical (by denying them access to a potential benefit).

“However, unless this is coupled with rigorous data collection that enables the access to experimental medicines that are no better than current standard-of-care to be quickly withdrawn, this access could rapidly become a way to peddle snake oil.”

Maria Rigolo, a Veteran Advocate who voted “No,” also commented on tracking data: “One has to be enrolled in a clinical trial, so results can be tracked. Any testing, scientific study, one has to be in a controlled group, then other non controlled group. Doses, side effects, and effectiveness must be recorded.”

Another, anonymous, “No” voter said: “Mainly the results for the fatally ill person and possible adverse events are likely to be lost to the company and other involved researchers. If some way can be found to capture these data and include them in the actual trial results, I’d seriously consider participating in the use of a new drug or procedure.

The point about “data collection” is well-taken. In the past, the FDA has not been good at collecting postmarketing study data (read “FDA is Lax in Enforcing Law Regarding Prescription Drug Postmarketing Studies“), so it is valid to ask whether the agency will have the resources to collect data about outcomes from right-to-try “trials” and whether that data can be used in determining whether the drug should be approved or not. That, in fact, is a ticking point with pharma companies who fear that such data would not be beneficial to their case for approval.

Ed Silverman, Editor of Pharmalot, wrote in an open letter to VP Pence:

“Drug makers may have several legitimate reasons for denying a request for access to an experimental drug they’ve been testing. They may not want to risk giving the drug to a patient outside of a controlled clinical trial, because if the patient has a bad reaction, that could undermine their effort to get the drug approved by the FDA.

And smaller companies, in particular, may lack sufficient supplies to grant a large number of requests.”

Many of the “Yes” respondents appear to be patients, some of whom have life-threatening medical conditions with just months to live:

“If someone is terminal and a not yet approved drug has the possibility of saving them, why should they not be allowed to try? If I’ve been given 6 months, and XYZ Drug Co has some novel drug that could stop my disease in it’s tracks, why would I not want to take that risk? Even if the potential side effect is speeding up my demise. Why not try and extend my chances, plus, I would be a real live effectiveness example for the drug company to use in their studies. As long as my quality of life improves, it’s worth the risk of my life that is already forfeit.”

The most common sentiment of “Yes” respondents is “what do they have to lose” as in these comments:

“If they are looking toward end of life what does this option hurt? Even if it does not save their life it could lead the way to saving another or changing a process to save another.”

“What have they got to lose? Let them receive counseling under the care of a doctor and receive the critical information regarding possible endpoints and side effects. Theses people will then have made an informed decision. Frankly, who are you or VP Pence to stand in their way?”

I invite you to take the survey and give me your opinion as well.