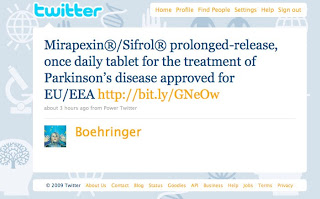 Yesterday, I cited a bit of ABPI code of Practice in relation to Boehringer’s #COPDChat: “Using twitter to alert health professionals about the publication of a study on a medicine is likely to be considered promotion of that medicine.”

Paul Tunnah of pharmaphorum commented that “I am not sure ABPI code as written above prohibits tweetchats. Clearly, promoting medicines via Twitter is a big no-no, but if the intention of the tweetchat is to understand disease area issues and challenges (ie. more about research, as I see this as doing) and is not mentioning specific products or data related to them why would it contravene the code?”

To which I responded: “I agree that these are worthwhile initiatives and as long as BI does not mention product names and data, then it should be OK. I just wish regulatory agencies could quickly publish their own opinions of specific TweetChats like these rather than promise one BIG guidance trying to cover every possible scenario [and then not delivering on that promise!]. If these [TweetChats] were cited as ‘regulation OK’ then more pharma companies might follow the lead. Right now, it’s regulation via silence, which can be broken at any time as did the FDA’s famous 14 warning letters!”

NOTE: The following is a previous BI Tweet (posted back in October 2009. and not part of any TweetChat) that should not have passed muster with regulators:

This is the sort of branded Tweet Paul is talking about.

Since guidance from regulators such as the FDA is not legally-binding, why spend years developing overreaching guidance documents that try to cover every conceivable situation? Wouldn’t it be more helpful to issue an “opinion” — also not legally binding — regarding a specific use of social media such as BI’s #ChatAFib or #COPDChat TweetChats? FDA and PMCPA could review the transcript of such chats to inform their opinion whether or not these chats are “regulation safe.”

I think that would be more helpful than waiting to see if you get a letter or not 6 months down the road!

Give me your opinion in the following little poll: