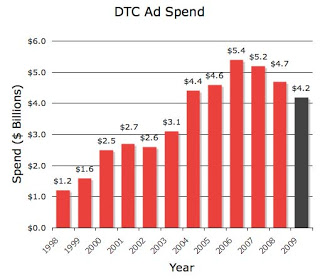 “The U.S. economy has been in recession for about a year, according to the research organization [NBER] that tracks economic cycles. The determination was made Friday and released to the public Monday.” (WSJ)

[It sure took them a long time for these dodos to release this information!]

But using the NBER “peak and trough” definition of recession and looking at this chart (on left) of annual spending on direct-to-consumer (DTC) advertising, it appears that the pharma industry economy “peaked” in 2006, one full year prior to the US economy as a whole!

What do you think is The Future of Rx DTC Advertising? Take my survey and predict what the level of DTC spending will be in 2009.

P.S. AdvertisingAge confirms that the advertising industry began its recession before the general industry did: “Ad-industry employment has dropped by 52,000 since hitting its peak in November 2007” (see “No Surprise: We’re in a Recession“).