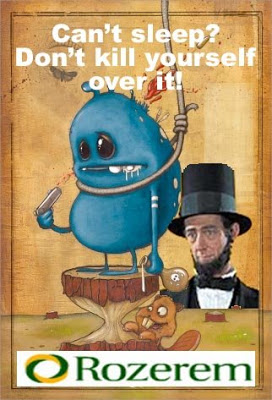 Under the leadership and creative guidance of its advertising agency, the marketers of Rozerem sleep-aid medication launched a new print ad campaign that emulates the edgy, break-through-the clutter type of ads common in the packaged goods industry.

The new ad is shown on the left.

This is the first time that a pharmaceutical company (Takeda) has coordinated efforts with a packaged goods company — ie, Pepsi — to use similar themes and images to create consumer ads.

“There’s but one calorie in PepsiMax and, as we know, one is the loneliest number,” said AdvertisingAge. “So it only makes sense that a new flight of print ads from BBDO Dusseldorf show a cute but sad little personification of a calorie committing suicide in a few ultraviolent ways, including a gunshot, a hanging, self-immolation and even his slitting his little blue wrist with a razor blade.”

It only makes sense as well to exploit the suicide theme in sleep-aid drug ads. Studies reported in the anti-drug industry press have shown a definite link between lack of restful, dreamy sleep and suicide in certain people.

The new Rozerem ad still features Abe Lincoln and the Beaver, although their roles seem to have diminished and they serve only as icons linking us back to the classic Rozerem ads of yesterday (see “Rozerem Ads Dis Lincoln, Show Beaver“). It also makes sense to exploit again the image of the 16th president in ads now that Barack Obama is president-elect. I say that because we are often reminded of the similarities between Obama’s campaign and Lincoln’s as well as the type of cabinet both presidents have assembled.

Cramer-Krasselt, the Rozerem ad agency of record, could not be reached for comment. Actually, I never even tried 🙁