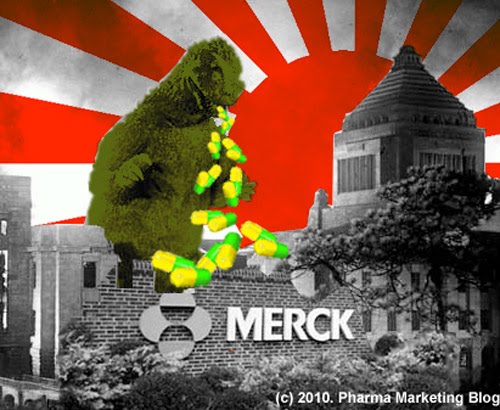 With regard to new drug approvals in 2009, “Pfizer and Merck were among the big names that struck out for the year,” says Peter Landers over at the WSJ Health Blog. Companies that did NOT strike out were four Japanese companies, including Teijin, a major textile maker!

I was inspired by this story to create this cartoon:

A note about Godzilla (from wikipedia):

Godzilla is one of the most recognizable symbols of Japanese popular culture worldwide and remains an important facet of Japanese films, embodying the kaiju subset of the tokusatsu genre. He has been considered a filmographic metaphor for the United States, as well as an allegory of nuclear weapons in general. The earlier Godzilla films, especially the original Godzilla, portrayed Godzilla as a frightening, nuclear monster. Godzilla represented the fears that many Japanese held about the nuclear attacks on Hiroshima and Nagasaki, and the possibility of recurrence.

As the series progressed, so did Godzilla, changing into a less destructive and more heroic character as the films became geared towards children. Since then, the character has fallen somewhere in the middle, sometimes portrayed as a protector of earth and monster island (and japan) from external threats and other times as a bringer of destruction. Godzilla is also the second of only three fictional characters to have won the MTV Lifetime Achievement Award, which was awarded in 1996.

Get a Load of Those Gams!