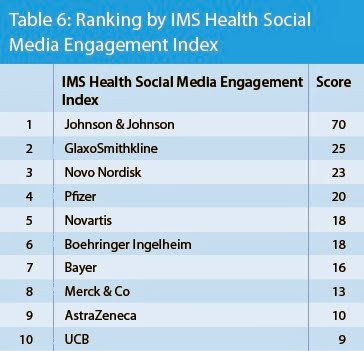 According to a new report released today by the IMS Institute for Healthcare Informatics, nearly half of pharmaceutical companies are now actively using social media — specifically Facebook, Twitter and YouTube — to “engage with patients on healthcare-related topics” (see press release here).

Before those of you who see the glass half full get too excited, however, IMS points out that only ten companies utilize all three of these major social networking services for healthcare topics. “Many companies are using social media primarily as a unilateral broadcasting channel to physicians and patients, with limited interaction or fostering of discussion,” says IMS.

These results are based on the IMS Health Social Media Engagement Index, which assesses reach, based on the total number of individuals exposed to a message via likes, shares or re-tweets; relevance, the degree that content is found useful and shared across social networks; and relationship, the level of direct interaction around specific content.

According to the data shown in the above table, Johnson and Johnson is by far the most socially engaged pharma company. Its overall Engagement Index is 70, which is almost 3 times GSK’s second-highest score of of 25!

How is it that J&J’s score is so far and away above the others?

To answer that question, I tried to get a list of all the social media sites IMS used to determine its Social Media Engagement Index, but that specific information is not available. I wanted to know what kinds of sites were being looked at.  Corporate Facebook and Youtube pages and twitter accounts? Or Rx-branded and unbranded disease-awareness sites? Or OTC product sites that are not regulated by the FDA? Or all sites mixed together? Only by having access to this information can I be sure that IMS is comparing social media apples to social media apples (and not lemons :-).

I have written about pharma’s use of social media and given kudos to several pioneers for their efforts. J&J (actually its Janssen UK division), for example, received my 2010 Pharmaguy Social Media Pioneer Award for the Psoriasis 360 Facebook page, which was the first consumer-oriented pharma FaceBook page to allow comments without pre-moderation (see here). That was surely an engaging social media site. However, it was taken down in August 2011 after Facebook changed its comment policy. Several other “engaging” unbranded pharma FB pages suffered the same fate at that time.

According to IMS data, J&J racked up an impressive 590 “Likes per Post” on Facebook. It’s also one of the very few companies that allow comments on its YouTube channel. These facts are what gives it such a high rating.

J&J’s major Facebook presence is its corporate site, which has more to do with public relations than with engaging patients about J&J’s products. The same could be said about its excellent YouTube channel.

J&J also has a huge presence in social media focused its non-prescription consumer products. These sites are not regulated by the FDA, so it is much easier to have open discussions on these sites. Perhaps this is why J&J got such high marks from IMS.

So, although J&J scores high overall, I suspect that if you eliminate the corporate social media communications from the analysis, J&J may not be any more “engaging” than Novo Nordisk, Boehringer Ingelheim, or Sanofi.

Sanofi, BTW, is not even on the IMS list despite the fact that, IMHO, the Sanofi U.S. Diabetes team is doing a great job supporting patients via social media (see, for example, “Dennis Urbaniak, Joan Mikardos, and Laura Kolodjeski of Sanofi US Receive the 3rd PharmaGuy Social Media Pioneer Award“).

To understand why IMS says “Mid-sized companies appear to be utilizing social media just as well, and often even more effectively, than the ten largest pharma companies,” you need to look at its breakdown of the overall Index into rankings according to Reach, Relevance, and Relationship (see Table 5, below).

“Among the four top ranked companies in the Reach and Relevance Indices, only Johnson &
Johnson retains a top ranking in the Relationship Index,” notes IMS. “This may reflect a focus on reach that
helps drive relevance, but may not translate to relationship development. Many companies
appear to use social media as a unilateral broadcasting channel to physicians and patients, with
limited engagement or fostering of discussion.”

So, just looking at the Relationship Index, we see that several smaller/mid-sized companies — Novo Nordisk, UCB, Hospira, and BI — beat out behemoths like Merck, AZ, and Pfizer.

As far as I am concerned, you don’t need a quantitative social media index to tell you which way the pharma social media wind is blowing. It would be better to look at specific case studies such as UCB’s “Active Social Media Listening” approach, which I wrote about recently in Pharma Marketing News (here).

Missing Warning Letters Prove that FDA is an Internet Dunce!