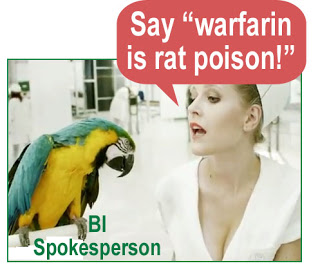 Why does it always seem that pharma direct-to-consumer (DTC) advertising competition for market share comes in threes, or as I like to say, “DTC Melee-a-Trois”?

Last year around this time, I wrote about three companies competing for diabetes market share (here). The diabetes drugs squaring off in that melee were Januvia, Onglyza, and Victoza. To win over consumers, each implemented an online content marketing campaign that featured recipes from celebrity chefs.

My thought at the time was that none of the drugs had an efficacy advantage, so each had to engage in a battle reminiscent of Food Network’s Iron Chef.

Today, I read about Pradaxa, Xarelto, and Eliquis, which are fighting for a share of the atrial fibrillation (AFib) market (see “The Warfarin Replacement Ad Fight“).

Unlike diabetes, AFib cannot be mitigated via change in lifestyle. Therefore, there isn’t much opportunity in this therapeutic area to engage in any kind of popular content marketing. There’s only so much content you can create and curate that is relevant to AFib.

So how are marketers at Boehringer, Janssen (J&J), and BMS positioning their respective expensive anti-AFib Rx drugs — Pradaxa, Xarelto, and Eliquis, respectively  — to compete with warfarin — an inexpensive generic drug?

In this case, each drug has a common foe: warfarin, which is a generic drug that was first approved for use as a medication in 1954 and has remained popular ever since. According to Wikipedia, “warfarin is the most widely prescribed oral anticoagulant drug in North America.” Each marketing campaign focuses on warfarin’s Achille’s heel: it requires frequent monitoring to make sure the levels are correct. “For elderly people,” says Bob Ehrlich (op cit), “going to the doctor frequently to get a blood test is a pain, literally.”

Aside from that, however, each online DTC campaign uses similar imagery of an elderly couple (see collage above) and the patient is the husband (or father).

I learned from an article in the J Am Coll Cardiol (here) that an equal number of women and men suffer from AFib, which usually occurs in people over 75:

So, why are women only portrayed as caregivers and otherwise “left out of the [Afib] picture” in these ads?

An interesting sidebar: Some time ago, Boehringer was cited for dirty fighting when it violated Clauses 2, 9.1, 3.2, 22.1 and 22.2 of the ABPI (Association of the British Pharmaceutical Industry) Code of Practice.

The case involved newspaper articles that referred to Pradaxa as a “super pill” and a “revolutionary drug.” The stories also dissed the competition (warfarin) by referring to it as “rat poison” (see “BI Masters the Art of WOM through Its ‘Parrots,’ er, Spokespersons“).