ePharma boosters see the latest direct-to-consumer (DTC) advertising spending numbers as a positive sign that the drug industry is finally increasing its allotment to the Internet in its DTC marketing budget. Nielsen data indicate that “spending on Internet ads, which has doubled over the last five years, hit $117.4 million, up 31 percent” (see “Drugmakers boost consumer ad spending 2 pct in ’09“). Total DTC spending increased 1.9% in 2009 vs. 2008. All these data do NOT include search engine advertising, which I will get to in a minute.

I am having some problems with the numbers when I compare them to previous reports. For example, the total ad spend in 2009 was reported to be $4.51 Bn. If that is a 1.9% increase over 2008, then ad spending in 2008 must have been $4.42 Bn. But data reported previously by Nielson (see here) says pharma ad spending in 2008 was $4.34 Bn. My notes, however, indicate that the latter was an estimate based on spending for the first 9 months of 2008. So let’s forget the latter total and use the former (I adjusted it to $4.425 based on a 1.9% year-over-year increase, which corresponds to Nielsen’s latest data; see here).

Working backwards from the year-over-year percent increases reported by Nielsen, I get the following table comparing 2009 to 2008:

All the % Inc/Dec numbers agree with the Nielsen data as reported by AP here. However, the Outdoor spending number for 2008 is suspect. I had to use that number to make sure the total for 2008 more or less agreed with the total based on a 1.9% year-over-year increase. Believe me there are other numbers out there that add up even worse, such as this table I found on World of DTC Marketing:

The totals in this table aren’t even close to what was reported in the AP article (Nielsen data). Actually, these are numbers for the first 9 months of each year. But TNS Media Intel’s 2009 Internet number of $220.9 million is much larger than Nielsen’s 2009 number of $117.4 million. How can these be so different? I’m pretty sure both are reported “measured” media, which does not include search engine ads. TNS/Kantar Media Intelligence told me that it tracks over 3,000 sites throughout the US and Canada, which is a different methodology than that used by Nielsen. So it’s important not to compare these apples and oranges! Note: TNS/Kantar Media reports that outdoor pharma ad spending for 2008 was $3,084 million. 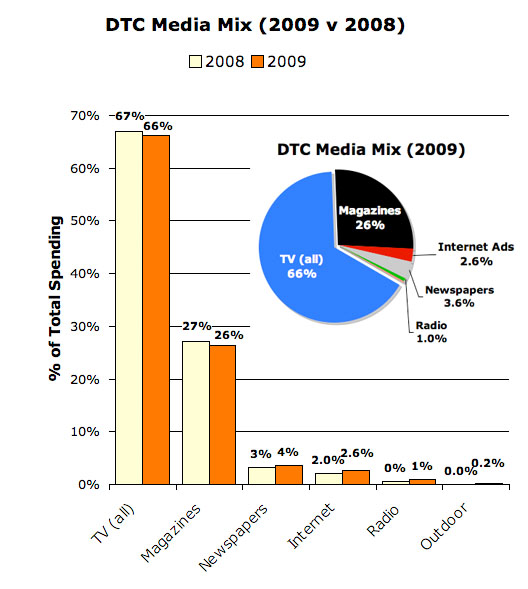 According to this, Internet spending (not including search) increased to 2.6% of the overall DTC budget. This is still much less than the 3.6% spent on newspapers! What happens, however, if you add in an estimate for search engine ads? It’s been estimated that SE advertising accounts for 40% of online spending. But I’m guessing that pharma pulled back from SE advertising after FDA issued warning letters at the end of March 2009. Let’s say SE spending by pharma in the 9 months after that dropped by one-third. According to my back-of-the-napkin calculations, this is how I see TOTAL Internet spending by pharma in 2009 compares with that in 2008:

You can check my math. You will see that in 2008 search equaled 40% of the total Internet spend, whereas in 2009 it is only 33%. This seems believable. If so, then the total Internet spend in 2009 increase only about 18% over 2008, which is a lot less of an increase than 31% and in line with the increase for old media newspaper advertising! Who’d have thunk old media could compete so well with new media?