Shirley Ledlie, aka “Ann Adams”, “Julie Kahn”, “Jasper Boon”, and who-knows-how-many-more-phony-FB-aliases — the patient who claims sanofi-aventis (S-A) mislead her about the side effects of cancer drug Taxotere (see “sanofi aventis Feels the Social Media Pain. But Is It Authentic?“) — is laying siege to S-A’s VOICES Facebook page. Maybe some of these other people are real friends of Shirley and not just fake FB accounts. Only Shirley knows for sure. She has recruited at least one real person– her daughter — to post for her:

“Hello John,” Shirley posted to my FB Wall yesterday, “just to tell you your freind (sic) was right. The SA voices is the real deal. I posted and the same day my post had vanished and i was blocked. So i posted again and within 5 mins my other name was blocked and removed. I think they have someone sitting there waiting for me – so my daughter is going to post for me while i open another account.”

Today, the VOICES page is flooded with messages from Shirley et al similar to this one posted by “Julie Kahn”:

“If your company is typical of the blinkered attitude that big drug companies take when faced with genuine grievances from the poor people that have suffered by using your products – well no wonder that intelligent people are so cynical about the merits of the huge pharmaceutical machine.

“Just because things test fine on the poor animals that are… See More… See more used does not mean that humans will also do well on them. You need to modify certain things with Taxotere and you should be falling on your knees thanking some of these women who have information that will help you. Surely feedback like theirs is vital to your organisation. If you truly cared about improving people’s lives through your product you would contact these women and find out about their stories – not just delete their posts and pretend that all is fine in the Sanofi-Aventis garden”

You can find all the posts by visiting the VOICES FB page, but in case they are removed by S-A, I’ve collected them here.

The VOICES FB page is a legit S-A page, which focuses on support of Deep Vein Thrombosis (DVT) prevention and awareness. [CORR: This S-A FB page is NOT focused on DVT. It’s more vague than that: it’s a corporate communications effort to “..[e]mpower employees, retirees, friends, families and communities to educate, engage, and mobilize with our grassroots network as we focus on healthcare industry priorities.” DVT was just mentioned as one of these priorities in a post to the Wall]. In any case, this is an unbranded site. VOICES is an acronym for Vitalize, Organize, Involve, Communicate, Educate, Serve.

This attack smells to me like an organized campaign designed by professional PR people who might be employed by a law firm representing Shirley in a current or planned lawsuit against S-A. I asked Shirley:

“Don’t you think you are going too far? While you may have a legitimate issue with S-A, is flooding its FB page … (VOICES) ethical on your part? I suppose you have a lawsuit against S-A brewing. If so, why don’t you reveal that in your posts? Let me know — I am blogging now!”

She responded almost immediately: “Hi John, no lawsuit that we know of. They refuse to answer my registered posted letter and emails so…………”

Probably the papers have not yet been served, therefore no “lawsuit”!

Where’s the Terms of Use Policy?
In any case, S-A has made a faux pas and has NOT taken its own advice about posting a Terms of Use policy on its VOICES Facebook page. In comments to the FDA, S-A stated that

“It is advisable for company sites to include clearly-stated Terms of Use … For unbranded (non-promotional) sites, such as those devoted to disease awareness, sanofi-aventis recommends the following Term of use:

‘This site is not intended as a forum for discussing specific products or other treatments. It’s best to talk to your doctor about specific treatments. You may want to contact our Medical Information Department for product specific questions at 1-800-xxx-xxxx.'”

I searched the VOICES FB page and could not find any Terms of Use statement.

Where is S-A’s Social Media VOICE?
S-A sure is getting a lesson on how to handle social media communications! What it needs to do quickly is to get vitalized, organize its response, involve its legal and PR people, communicate with Shirley, and educate themselves about social media so that they better serve their FB community!

P.S. I was just informed that all the posts I mentioned are now gone from the VOICES FB page. I, however, still find the comments posted to the site’s Wall. In case you think I made all this up, I took a screen shot of the top few posts this morning. Here it is: 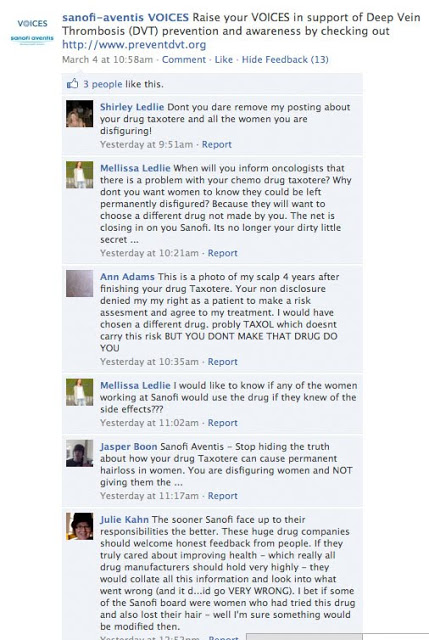 As I mentioned above, you can find all the posts copied here.