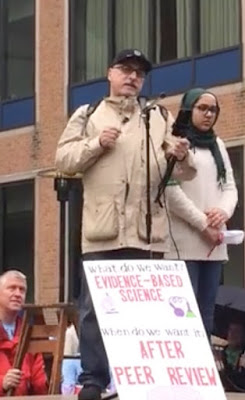 My name is John Mack and I
live in Newtown.

On Twitter I am known as
PharmaGuy – that’s P-H-A-R-M-A, plus “Guy!” I PUBLISH a newsletter for the
pharmaceutical industry. And I have a graduate degree in Biochemistry.
Every day we benefit from medicines
and vaccines created by scientists
who work in pharmaceutical and government-funded research laboratories.
We need to discover new drugs
faster and defend efforts that make those drugs cheaper and more accessible to
everyone.
In doing so, however, we also
need to defend the scientific methods the drug industry uses to prove that
medicines WORK.
A big part of that process is
the Food and Drug Administration, which ensures that drugs are proven safe and
effective through rigorous clinical
trials.
Today the Food and Drug
Administration and other science-based agencies like the National Institutes of Health and the Environmental Protection Agency are under attack by the current
administration,
WHICH intends to increase SPENDING
on the military and decrease SPENDING on these and other science-based agencies
that help improve our lives.
We should not have to sacrifice science
for security.
DEFUNDING science impacts us
on a local level whether the issue is the quality of our air and water,
fracking, opioid drug abuse, or the heroin epidemic.
We need leaders who believe
in data and scientific evidence to help solve these problems.
More scientists must get
involved in politics today just as Benjamin Franklin did during the American
Revolutionary War.
There is a war being fought today – a
war against science.
We must defend science in THIS war.
Marching together is a good
first step.
But we must follow up by
electing pro-science leaders and
ensure that they rely on evidence, not
beliefs, when making decisions about our health, our environment, and our
general well-being.

Thank you for listening and
may Science be with you!