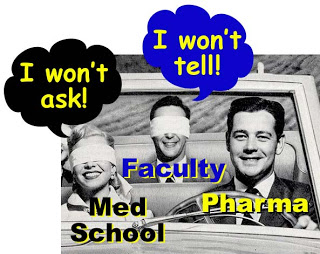 Drs. Joseph Biederman, Thomas Spencer and Timothy Wilens — faculty members at Harvard Medical School — were accused of accepting more than $4.2 million from drug companies for psychiatric research and other activities between 2000-2007 without reporting the income to Harvard, MGH or the federal government, according to NPR blog.

In their “Dear Colleagues” letter sent on Friday just before the 4th of July holiday weekend — when not many of their colleagues would be in town — the docs said it was an “honest mistake” (find their letter here).

The offending physicians — one of whom (Biederman) is a “leading proponent of the off-label use of antipsychotic drugs to treat bipolar illness in children” — claim they should have spent “more time and attention to the detailed requirements of these [COI] policies and to their underlying objectives.”

It seems that a lot of doctors and medical schools make these “honest mistakes.”

I reported previously that when it comes to enforcing COI policies, universities have “allowed permissive interpretations and relied on the honor system,” said the authors of a ProPublica article. ProPublica’s review shows many physicians are in apparent violation of policies, and “ignorance or confusion about the rules is widespread” (see “Medical Schools Don’t Ask & Faculty Don’t Tell If They Violate Ban on Paid Pharma Speaking Gigs“).

A commenter to the NPR blog post said “They were ‘mistaken’ for a seven-year period…then that’s how long they should be barred from such activities.” In fact, Harvard and MGH barred the three physicians from accepting payments for “all paid industry-sponsor outside activities” for only one year.

NPR said “Harvard and the MGH didn’t allow much sunshine in on the outcome of its lengthy investigation of the case.” Such sunshine might reveal what contributed to the 7-year “mistake” regarding compliance with the COI policies. Perhaps the policies themselves need investigation?