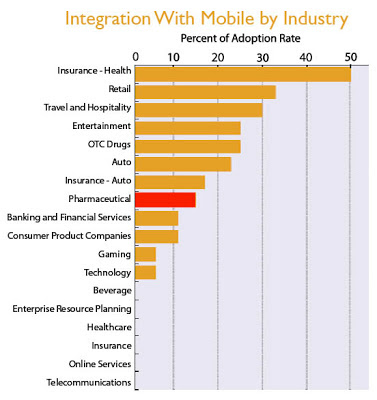 The pharmaceutical industry “would benefit from studying and judiciously adopting some of the more innovative ways that other industries interact and build band affinity through their community models,” says ComBlu, a firm which builds online and offline communities. Comblu’s fourth annual study, “State of Online Branded Communities,” offers a view of how some of the biggest and most respected brands approach online community broadly defined as “an engagement ecosystem that has no walls. Community includes offline conversations, social networks, review sites, gated brand communities and content hubs,” says Comblu.

Comblu specifically looks at the community and social marketing programs of 92
companies, all of which are major brands, across 15 industries. Comblu mentions several pharma “communities” in its study and singles out Johnson & Johnson’s My Coach Sleep — TYLENOL® PM branded app/site — as a “great example” of mission-appropriate engagement.

The report also mentions Pfizer’s “Lipitor app,” which Comblu says, “integrates” with its online community. I guess Comblu is referring to “Recipes 2 Go,” an app that was linked to a Lipitor for You program, which offered a $4 co-pay card. That app, however, was quickly retired, perhaps because it was a marketing failure (see “Pfizer’s Short-lived LIPITOR Branded Mobile App: Was It a ‘Bad Ad’ or Just a Bad Idea?“).

Comblu rates the communities of major industries according to how well they follow 33 “best practices” that relate to content and engagement. It also discusses “worst practices.” What’s the #1 worst practice? “Moderating comments, stories and
photos before posting to the community site.” Overcoming that is something the pharmaceutical industry cannot “judiciously adopt” from other industries due to many factors (mostly regulatory). It’s no surprise, therefore that the pharma score falls in to the “Lights Out” category, which is to say it scored less than or equal to 21 points. Of the ten lowest-performing brands, eight are in a regulated industry, including four pharmaceutical companies and four OTC brands. Here’s the chart: 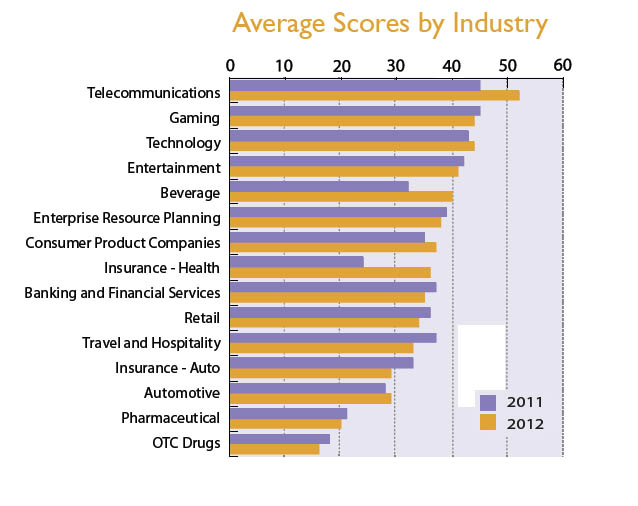 It’s no surprise that the Rx pharma industry would score low. Many of the  community”best practices” advocated by Comblu are nearly impossible for the pharmaceutical industry to score highly on. Pharma industry best practices must incorporate “lowered expectations” commensurate with a highly regulated industry. That being said, I am surprised that the OTC drug industry fared worse than the Rx drug industry according to Comblu. If low scores are directly related to greater regulatory pressure, then the OTC industry, which faces less stringent regulations than Rx, should have a better score than the Rx industry. Whatever.

The pharma industry, however, does somewhat better in terms of “Integration with Mobile” as shown in this chart: