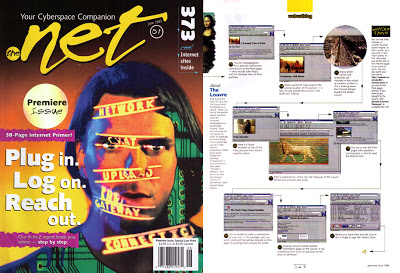 While cleaning out my basement I came across a box that contained the premiere issue of “The Net,” a magazine published in June, 1995. I saved this magazine because my photos of Paris were featured in an article about “Le Louvre,” a popular Website of the time (see image below, which shows the cover and the page with my photos; click on image for a larger view).

The author of the article claimed that WebCrawler — the first Web search engine to provide full text search that went live on April 20, 1994 — found 308 links to the “Le Louvre” site. This was enough in those days — BEFORE Google — to make a site “popular.” Today, a Google search on “Le Louvre” yields 4,380,000 results!

But the article actually talks about “Treasures of The Louvre,” which wasn’t the official Web site of the famous museum! It was a series of pages put online by a UCSD student. Around the same time, the “unofficial” Glaxo pharmaceutical web site was created by a single employee without the knowledge of executive management! Can you believe it?

Anyway, my photos were not part of the “Le Louvre” site but were included in a site about Paris, which was linked to “Le Louvre” (wow, the WWW is nifty). My section of that site was titled “A Personal View of Paris.” Unfortunately, that site is no longer available, but you can view “John Mack’s Views of Paris” is still available on the Web here on flickr.

Some of the other Internet pioneers and pioneering apps, however, are no longer available or relevant. These include “Gopher,” “Archie,” “WAIS,” and “Veronica.” Ah, my first loves!

BTW, I was providing pharmaceutical information on the Web even before 1995. In 1994, I teamed up with Oncolink to post articles about new oncology drugs. Oncolink was started by an employee of the University of Pennsylvania. His daughter had cancer and that’s why he developed the site. Later the University took over this most popular health site on the Net, without so much as a thank you to the creator! It now claims the site “was founded in 1994 by Penn cancer specialists.”

After that — in 1995 — I launched my own pharmaceutical site called “PharmInfoNet” and the rest is history.

Botox Banality Not a Boon for TV Sitcoms