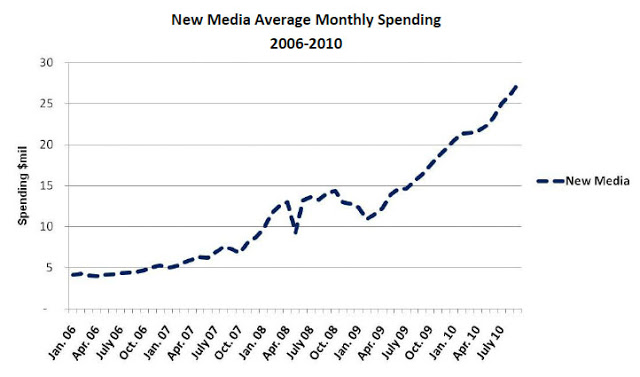 It’s always been difficult to get a handle on the amount of money pharmaceutical companies spend on promotion to physicians and especially how much of the total spend is focused on “e” channels such as Web advertising and Internet detailing. Several different companies offer estimates that vary depending upon exactly what they include when totaling up the numbers.

But no matter what the source and how the numbers differ, my analysis is always the same: spending in the “e” space is a tiny fraction (less than 5%) of total promotional spend and has remained in that range every since I can remember!

Today, I received a summary of a report from SK&A, a market research company, titled “U.S. Pharma Company Promotional Spending Trends in New Media” (see here). Of interest to me were the sections on “New-Media Average Monthly Expenditures, 2006 to 2010” and “Promotional Expenditures by New-Media Channel, Oct. 2009 to Sept. 2010.” Again, the numbers show that pharma spends very little on ePromotions or “New Media” promotions or whatever you want to call it.

According to this report, “Pharmaceutical companies are finding novel ways to promote their products to physicians and other prescribers, namely through new media channels such as internet detailing, tele-detailing, e-meetings and web advertising.” It’s interesting that the telephone (as in “tele-detailing”/”Telephone Detailing”) has been included as a “new media” channel. And here I thought the telephone was invented over 100 years ago!

SK&A says that “tele-detailing” accounts for 49% of the new media channel physician promotional spend, whereas “Internet Detailing” is only 35% and Web advertising is a meager 1% (see chart below). 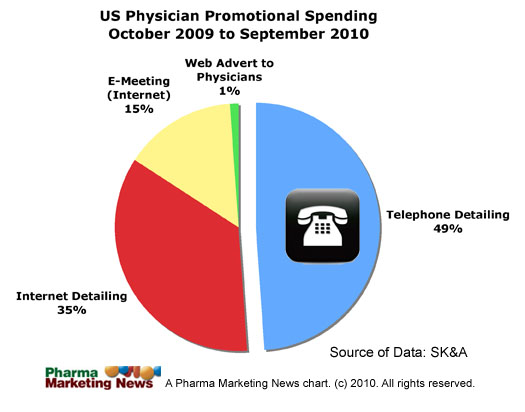 According to the report, which is based on an “ongoing survey panel of 2,455 physicians and other healthcare practitioners,” the total U.S. “New Media” channel promotion spend by pharma focused on physicians was $327 million during the 1-year period between October 2009 and September 2010. That includes $160 million for “Telephone Detailing.”

The report claims that “In the U.S., promotional spending [aimed at the HCP audience] totaled $24 billion between October 2009 and September 2010.” Thus, “New Media” spending represents ONLY 1.4% of the total spent on promotion to physicians by pharma companies. If we eliminate the $160 million spent on telephone detailing, that percentage drops to 0.7%!

But I bet the $24 billion includes the retail cost of samples, which could account for as much as $18 billion a year (see here). If so, then only $6 billion was spent on non-sample promotion to physicians and 2.8% of that went to “true” new media (ie, not telephone detailing).

Again, telephone detailing is included in the “new media” category. It could be that ALL of this “significant” increase is due to docs receiving more telephone calls from sales reps!

FOLLOW UP: November 23, 2010. Rich Meyer over at World of DTC Marketing Blog clarified how “Telephone Detailing” works and why it may have been included under “new media” in the SK&A report.

“There are many types of electronic detailing including detailing by phone,” said Meyer. “Phone allows physicians to hear a detail on demand along with an interactive presentation via the Web.”

“Corporate Blog” is an Oxymoron