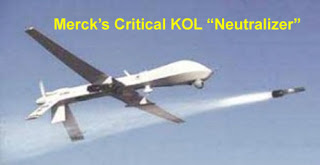 At first, when I read this Tweet from pharmalot (aka Ed Silverman):

“We may need to seek them out and destroy them where they live” http://tinyurl.com/cdg3c6

I thought it was something president Obama said about Osama bin Laden and Al-Qaeda terrorists.

Actually, it was something a Merck employee wrote in an email regarding a “hit list” of doctors who had to be “neutralised” or discredited because they criticized Vioxx. This according to the Federal Court in Melbourne, Australia where Merck & Co and its Australian subsidiary, Merck, Sharpe and Dohme, are being sued for compensation by more than 1000 Australians, who claim they suffered heart attacks or strokes as a result of Vioxx (see “Vioxx maker Merck and Co drew up doctor hit list“).

The Federal Court was told yesterday that Merck wanted to gain the backing of researchers and doctors – or “opinion leaders” – in the fields of arthritis to help promote the drug to medical professionals when it was launched in 1999.

Mr Burnside said internal emails in April 1999 from Merck staff showed the company was not happy with what some researchers and doctors were saying about the drug.

“It gives you the dark side of the use of key opinion leaders and thought leaders … if (they) say things you don’t like to hear, you have to neutralise them,” he said. “It does suggest a certain culture within the organisation about how to deal with your opponents and those who disagree with you.”

The court was told that James Fries, professor of medicine at Stanford University, wrote to the then Merck head Ray Gilmartin in October 2000 to complain about the treatment of some of his researchers who had criticised the drug.

“Even worse were allegations of Merck damage control by intimidation,” he wrote, according to Mr Burnside.

“This has happened to at least eight (clinical) investigators … I suppose I was mildly threatened myself but I never have spoken or written on these issues.”

Mr Burnside told the court Dr Fries went on to describe instances of intimidation, including one colleague who thought his academic appointment had been jeopardised and another who received phone calls alleging “anti-Merck” bias.

Funny. I just finished reading the MM&M “Antidote” opinion column written by Marc Siegel, MD, in which he said that “Merck has been hit over the head the past few years with attacks, several of which were unfair or overblown.” I wonder what category of attack this falls under?