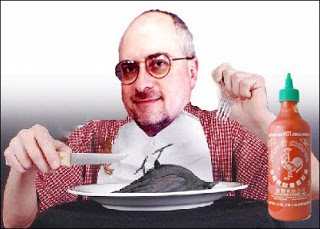 Last week I wondered why 5 warning letters citing violative paid search engine drug ads went missing and surmised that the FDA purposely retracted these letters because they revealed its ignorance of the Internet (see “Missing Warning Letters Prove that FDA is an Internet Dunce!“).

Unlikely as it seems, it tuns out that the letters were somehow lost when the FDA’s site was madeover/rebooted or whatever. Not only were the letters lost, they were not in the table listing all the April 2009 letters in the page cited above. Now that the letters are back and the table has been edited, you can find links to the letters and supporting documents.

Upon review of the missing letters, I do not find that the FDA mistook natural search results for paid ads as I thought might be the case. FDA may not, therefore, be as big a dunce as I thought! I apologize and am now “eating crow with hot sauce” as one commenter predicted I would. No matter, I am happy that I was instrumental in pointing out the problem to the FDA and in having the letters returned. It has also raised a few other issues I’d like to discuss.

Such as: if the site makeover was responsible for these letters going missing, what else is missing? “Too bad we [may never] know what else got lost in transition,” was a comment I received from a friend.

One of the previously missing letters was sent to Sanofi-Aventis regarding a Plavix ad that appeared on Yahoo! “What’s interesting,” noted a Director of Search Engine Marketing at a major healthcare advertising agency, “[is] it actually talks about ‘sponsored links’ but references natural search engine results NOT paid search ads. Could it be a mistake since these are not sponsored ads and these results cannot be bought?”

Actually, the FDA did NOT make a mistake, whereas this search engine marketing expert DID! The ads CAN and WERE bought!

Let’s look at the promotional material that the FDA included with the letter (see image below; click to enlarge; find the pdf file on the FDA site here — I hope!).

The letter says that the materials were submitted for FDA review by sanofi-aventis U.S. LLC (Sanofi) “under cover of Form FDA-2253.” FDA regulations require pharma companies to submit specimens of advertising devised for promotion of a prescription drug product at the time of initial publication of the advertisement. Sanofi, therefore, would NOT submit natural search results for review unless they were part of a paid program.

If you look at the table above the ad, you’ll see that Sanofi submitted what the “Pi Title Tag” should be, the keyword that triggers the ad to appear in the natural search results list, the URL the ad should link to, and the “Pi description” (what the ad should say, which violates the law according to the FDA). Thus, whenever the keyword “PAD Medication” was entered into the Yahoo! search engine, this paid ad — exactly as Sanofi-Aventis specified — would appear in the natural search results section.

I wrote about “paid inclusion” back in 2006 and pointed out that it is not a good search engine marketing technique for pharma to engage in, even if it passes FDA muster (see “Paid Inclusion: Too Hot for Pharma Marketing?“). Too bad, Sanofi-Aventis did not read that post.

Another interesting observation concerns the previously missing letter to Biogen Idec regarding it’s paid search engine ad for Tysabri. The supporting promotional material that the FDA cited in its letter is dated “8/19/2008,” seven and one-half months BEFORE the letter was sent to Biogen. Obviously, someone at the FDA was looking at these ads a long time ago. Could it be that the warning letter was delayed by Bush appointees at the FDA? I’ve pointed out before how top-down policy under the Bush administration was designed to delay the issuance of warning letters (see “FDA DTC Review: The House that Troy Built“). Now that there is a new administration, the warning letter floodgates are open, at least for letters already in process.

But has the process been sped up?

Although my original “missing letter” thesis — that FDA hid the letters to cover up its ignorance of search engine marketing — proved to be incorrect, I did learn a thing or two from this study that merits further discussion: