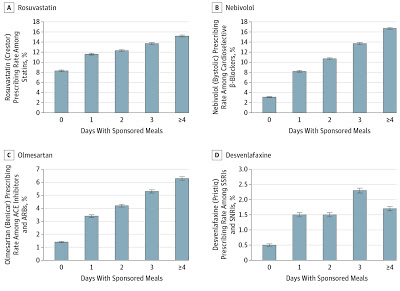 Most physicians do not seem to know that “there is no such thing as a free lunch.” Medscape’s 2012 Ethics Report survey, for example, revealed that 72% of 23,710 physician respondents answered “Yes” to the question “Do you feel that you could be unbiased with prescribing habits if you accept lunches from pharmaceutical representatives?” (see here).

But, according to other researchers, such thinking is a “slippery slope” on which “Physicians fail to recognize their vulnerability to commercial influences due to self-serving bias, rationalization, and cognitive dissonance” (see “Physicians Under Pharma’s Influence: Are Physicians Powerless Pawns of Pharma Psychology?“).

But what if it was a $20 lunch? More recent research indicates those lunches have significant ROI in terms of prescribing brand name drugs.

Accepting a single pharmaceutical industry-sponsored meal was associated with higher rates of prescribing certain drugs to Medicare patients by physicians, with more, and costlier, meals associated with greater increases in prescribing, according to an article published online by JAMA Internal Medicine.

Authors identified the most-prescribed brand-name drugs in each of four categories in Medicare Part D in 2013. The target drugs were rosuvastatin calcium among statins, nebivolol among cardioselective β-blockers, olmesartan medoxomil among angiotensin receptor blockers (ACE inhibitors and ARBs), and desvenlafaxine succinate among selective serotonin and serotonin-norepinephrine reuptake inhibitors (SSRIs and SNRIs). The 2013 Open Payments database describes the value and the drug or device promoted for payments to physicians for five months in 2013 as reported by pharmaceutical companies.

When Big Pharma Paid for Lunch & Learn Sessions, Academic Physicians Showed Up on Time – Now, Not So Much!