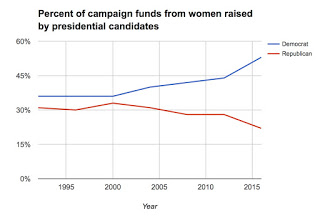 These are historic days for women. For the first time ever, a woman (Hillary Clinton) will be a major political party’s nominee for president of the United States. The odds are that Clinton will break through that particular “glass ceiling” this November and women are supporting her effort.

According to OpenSecrets.org (here):

“Hillary Clinton has raised a higher percentage of her campaign funds from women than any major party presidential candidate in recent history.

And Donald Trump has the dubious honor of achieving the exact opposite: He has raised less from women than any other major party’s nominee at this point in the presidential cycle since at least 1989 (which is as far back as our data goes).

The race dynamic makes for the largest gender gap in presidential fundraising history. Clinton has raised 53 percent of her campaign’s contributions of more than $200 from women, a Center for Responsive Politics analysis shows, while the comparable figure for Trump is a mere 28 percent. The divide is nearly twice what it was in 2012, when President Barack Obama raised 44 percent of his funds from women versus former Massachusetts Gov. Mitt Romney’s 28 percent.

Pharma’s Glass Ceiling
According to Women in Bio (WIB), an organization of professional women in the life sciences, “women hold just a small number of corporate board seats. In 2015, the 2020 Women on Boards Gender Diversity Index of Fortune 1000 companies showed that 17.9% of corporate directors were women. That number drops to 10% in biotech companies. These numbers are disproportional when you consider that women comprise about half of the total U.S. workforce, hold half of all management positions, and are responsible for almost 80% of all consumer spending.”

Women, it appears, support breaking the political glass ceiling, but what about the pharma industry glass ceiling?

Women pharma execs also appear ready to support breaking through that ceiling too and are organizing to do so.

First, women pharma employees recognize the historic importance of Hillary Clinton’s fight to win the presidency. According to campaign finance disclosures, Hillary Clinton has taken “more money from employees of America’s 15 biggest pharmaceuticals companies than all of the Republicans who attempted a run for the White House this year combined” (see Reuter’s article here). .

Second, women pharma execs are getting prepared to assume more leadership roles in the bio industry. WIB, for example, launched a “Boardroom Ready Program,” aimed to “help executive women achieve their goal of corporate board service. Inspired by Biogen’s successful Raising the Bar Program, WIB’s Boardroom Ready Program seeks to prepare exceptionally qualified WIB members for board service by providing a board certification training, and assistance seeking public and private corporate board opportunities.”

LifeSci Advisors, an investor relations consultancy, is a founding sponsor of WIB’s Boardroom Ready Program. I received an email from them asking me “get the word out” about the program. “If you know a great candidate,” asked LifeSci Advisors, “please encourage them to apply to the program before July 1st and refer them to us so we can answer any questions they may have.”

It just so happens I DO know some great candidates, starting with this list of Digitally “Savvy” Women Pharma Pioneers: