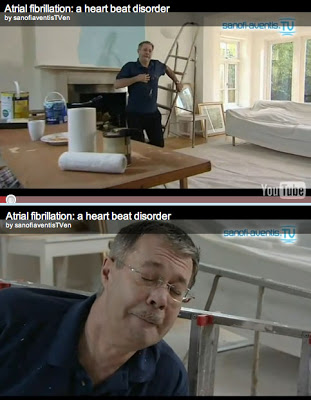 “[T]he size of YouTube’s community (some 490 million unique users per month) and the potential to trim costs – however slightly – following recent warnings that 2011 revenues could fall by 10% are likely factors [for why visitors to Sanofi’s standalone video website — www.sanofi-aventis.tv — are now sent to a new YouTube channel.]”

The first video I played was titled “Living in the Shadow of Atrial Fibrillation.” The first scene showed a man painting his living room. Suddenly, he falls off the ladder and for several seconds we see him breathing with difficulty, sweating, and grabbing his chest on the floor. Pretty dramatic. The full video is embedded at the end of this post. I assume it’s still available when you read this.

I’d like to focus on a couple of frames, however, from the first scene here:

Maybe you think this acting is a bit over the top or too dramatic.

It turns out that the “actor” is actually a real patient whose name is Bob. In other words, Bob plays himself in this opening dramatic scene of the video. The part of Bob’s wife, Samantha, however, “was played by an actress and based on her testimonial” says S-A in the closing screen of the video.

I’ve seen real patients in commercials sitting on a couch and talking and then appearing in other scenes cutting vegetables, planting flowers, riding bikes, taking baths, whatever, while a voiceover talks about the side effects. But these appearances require very scant acting skills. They certainly don’t require the “method acting” skills that Bob displays in the Atrial Fibrillation video!

I wonder: Did Bob get paid extra for this acting role? Obviously, S-A saved additional money by hiring a novice rather than a skilled actor such as the woman who played Bob’s wife.

I wonder: Did Bob learn his direct-to-consumer method acting skills from an as-yet-to-be-famous reincarnation of Lee Strasberg?

I wonder: Will further falls in pharma earnings lead to more patient method actors like Bob?

It’s a fascinating social media era we are living in. Not only are newspaper reporters being replaced by bloggers, but professional actors are being replaced by people playing themselves in online videos! We have Nalts to blame for this!