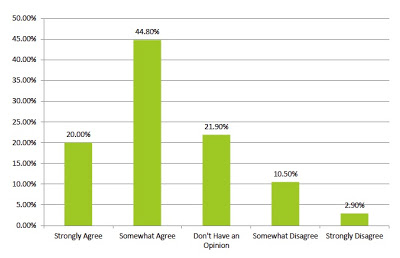 When the FDA announced it was moving a head with yet another study of direct-to-consumer (DTC) advertising, I said:

“Very few healthcare professionals are going to admit that advertising ADVERSELY affects their clinical decisions. Most would say it has no effect at all and many would say it has a positive effect; don’t forget all the money many physicians have received from the drug industry, which they also say does not influence their prescribing habits” (see here).

If a snap poll of 104 physicians by CMI/Compas has any value, nearly two-thirds of both primary care and specialty physicians agree (20% strongly; 45% somewhat) that DTC pharmaceutical advertising leads to inappropriate prescribing (see chart below):

I don’t believe these numbers would hold up if a significant number of physicians were polled as will be the case with the FDA study. But let’s just assume they will. What does this mean? Am I wrong?

No, I am NOT wrong. I haven’t seen yet the actual questions in the CMI/Compas poll, but I would guess that no matter how the question about inappropriate prescribing was phrased, most respondents were thinking of the effect of DTC advertising on OTHER doctors’ prescribing, not THEIRS. It’s similar to how doctors feel about free lunches — they believe OTHER doctors are influenced by free lunch.

You can ask for the full ByDoctor® PULSE™ survey results here.