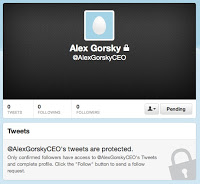 There are no Big Pharma CEOs that I know of who actively and directly engage with their stakeholders — investors, physicians, patients — using social media such as Twitter. There are probably many reasons for this. For one thing, they hire entire PR departments to be their “spokespeople.”

But I have suggested that future pharmaceutical C-suite executives will have to have experience “carrying the digital bag” (see here).

Alexandra Fulford (aka @pharmaguapa on Twitter), in an interview today (here), suggested that pharma execs could greatly benefit from having — and using — a personal Twitter account.

However, even when executives do open Twitter accounts, they often “protect their tweets”; i.e., allow only “confirmed followers access to their Tweets and complete profiles. Such is the case with Alex Gorsky, the CEO of JNJ. His Twitter account is @AlexGorskyCEO (see screen shot on left; click on it for an enlarged view).

Why is Mr. Gorsky “protecting” his Twitter account from people like me? Obviously, I can learn a lot about Mr. Gorsky if I were able to follow his tweets and see who he follows and who follows him. Does he have something to hide? Why, then, does he bother to have a Twitter account at all? Does Mr. Gorsky follow me or anyone else? Has he tweeted?

It’s hard to tell because I cannot see his account.

Fulford rebuffed the oft-heard excuse for why many pharma execs do not use Twitter in her discussion with m: it’s simply the “fear of following” and what they may hear from followers. The following is the relevant snippet of that discussion. You can listen to the entire discussion here.

listen to ‘Pharmaguapa on Twitter Followers & AEs’ on Audioboo