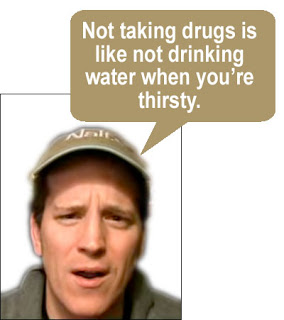 Kevin Nalty (aka “Nalts” the YouTube video blogger), who last week decided to quit his job as Consumer Product Director at Merck to “follow his passion” for video, may have been forced into his new career because of videos that were embarrassing to Merck. I mentioned his “ADHD Boy” and “Sucks Away My Will to Live” as examples in a previous post (see “Was Nalty’s Fart Video the Straw that Broke Merck’s Back or was it Some Other Video?“).

Immediately after I posted those videos on this blog, Nalts responded by RESTRICTING VIEWING OF THEM TO A PRIVATE AUDIENCE, BY INVITATION ONLY. That’s too bad because “ADHD Boy” was a brilliant spoof of a disease awareness ad that might have been sponsored by a drug company such as Merck.

In my continued effort to dig up more interesting facts about Nalts, I have found two more videos that may have embarrassed his previous employers, including Merck and J&J. The videos also provide more insight into why Nalts left Merck. It seems that his ADHD was a factor.

The first video I found was “Crackberry Blackberry,” which was selected as an official honoree at the 11th Annual Webby Awards, an international paid-entry-exclusive award honoring excellence on the Internet, including websites, interactive advertising, online film and video, and mobile web sites. The video is embedded below.

This video is a spoof of brand name drug ads. Nalts’ video notes state: “Now there’s a pharmaceutical cure for Blackberry addiction.” The video was uploaded to YouTube on June 5, 2006.

“Crackberry Blackberry” describes a new syndrome called “Crackberry Addiction,” which is a “Problem That Effects (sic) More than 10 Million Americans.” In the video, Nalts acts out several scenarios that demonstrate how addiction to use of your Blackberry can impact your work — ie, Nalts is seen participating in what looks like a product manager’s meeting — your family and loved ones and how it can endanger your life.

The solution? “Talk to Your Doctor About CracklosecER”

After the solution comes the fair balance. Here is where the spoof hits home at the drug industry. The side effects scroll by so quickly that it is impossible to read. Obviously, this video — had it been a real drug ad — would be cited by the FDA as violative.

I decided to pause the video during the side effect scroll to see if Nalts put anything interesting in there that would be missed by the typical viewer. Below is a screen shot of one frame of the scroll. 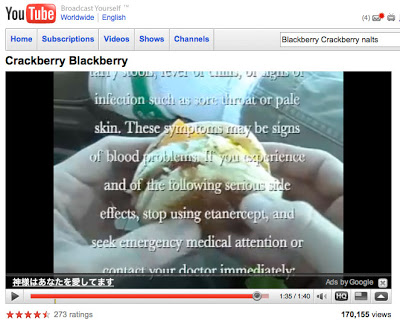 Note that a real drug name — etanercept (brand name: Enbrel) — was mentioned in the text, which probably was copied from the drug’s labeling.

This is interesting because Nalts (ie, Nalty) at the time this video was made (2006), was working at J&J, which markets Remicade, a product that competes with Enbrel (marketed by Wyeth). I know that Nalty was working for J&J in 2006 because of his own recollection mentioned in another video, “Thoughts on ADHD.”

In “Thoughts on ADHD,” Nalts talks about his days at J&J. In it, Nalts expresses “Lots of good comments on ‘ADHD Boy’ video.” This video was posted on March 2, 2008, while Nalts was employed at Merck (as Kevin Nalty).

“I’m allowed to make fun of ADD,” says Nalts, “because, of course, I totally have ADD.”

This video probably was not noticed by many of Nalts’ detractors such as Pete Quily (@petequily), an adult ADHD coach and blogger. “@nalts project insults, shame on #ADHD in hopes of distracting other from noticing that he probably has ADHD himself,” tweeted @petequily recently. To which Nalts replied “Denial? My ADHD can beat up yours any day. And humor, to the enlightened, doesn’t create stigma it dissolves it.”

In the “Thoughts on ADHD” video, Nalts says “When I worked at Johnson & Johnson [about March 2006, according to Nalts’s recollection in the video] , they used to call me ‘ADHD Boy.’ My boss at the time was really encouraging about getting treated,” says Nalts. “So I started taking Adderall.”

“Some people are really anti medication,” says Nalts in the video. “For me, this is like people complaining about being thirsty and then not drinking water. Sure I have ADD, but I’m medicated,” says Nalts as he pops a pill into his mouth.

“And then there’s the placebo effect of medication,” says Nalts. “sometimes when I go into a meeting where I know that I’m going to have to sit quietly, not be impulsive, I’ll take an ADHD med beforehand. I know the onset isn’t that quick, but somehow it sort of gives me the confidence to just sit still.”

It’s not surprising that Nalts would have to suppress his “impulsive” thoughts when sitting in a meeting at a Fortune 100 drug company. Perhaps, however, some of these thoughts also may have been creative and offered solutions to problems being discussed. I can see how Nalts would have suffered more because of corporate suppression of creativity than from “impulsiveness” brought on by his ADHD. When you reach the age of 40, as Nalts did last week, you begin to think of escaping any environment that suppresses your “will to live.”

Nalts/Nalty also mentions his latest (Merck) performance review in “Thoughts on ADHD” as he did in the now-withdrawn “Sucks the Life Out of Me” video. “My latest performance review at work was all about attention detail and focus. Ironically, about the time they fielded this 360-degree feedback, I accidentally cut my dose of Adderall in half unbeknowst to me. So that, I think, explains it to a degree.”

Nalts’ final piece of advice is: “Read The Secret. When I listen to that or The Power of Positive Thinking, that brings me to a happier place. It’s about redirecting your thoughts so you’re not all hyper-critical and you’re thinking positively and you’re grateful for what you have. It’s very easy to slip out of that.”

In the video announcing his career change, Nalts expressed his gratitude to his wife for supporting him at this critical point in his life.