There are plenty of negative comments on various Internet forums about the first generation of Omnaris TV commercials, which began to air last year. These ads featured military-style “Orkin” men sticking an Omnaris bottle up some unseen woman’s nose. “It’s so Freudian! Men sticking a phallic symbol up some woman’s orifice, saying they have what she NEEDS! Then saluting each other. Gawdawful. Eww.” That comment was found here.

The new Omnaris TV ad, which I saw last night during 60 Minutes, had less of the sticking the bottle up the nose animation and showed the full face of the woman, which makes the commercial less creepy. But it still lacked some of the messaging that Omnaris sales reps would like to see advertised.

You can find sales rep comments about the Omnaris ads on Sepracor’s CafePharma message board. Most of these comments claim the ad doesn’t mention the main selling points of Omnaris. “Where is the stick and stay messaging… won’t run down the back of your throat?” asked one anonymous CafePharma poster. “Stick and stay is not a proven benefit,” retorter another anonymous poster, “it has not been shown to have clinical relevance. You just proved why you are a rep and not anyone in charge of the marketing…you don’t know anything. Leave the big decisions to the adults and you keep trying to do what you are supposed to do.”

It appears that “stick and stay” is a benefit these reps are taught to mention to physicians. “we know most of the omnaris claims we tout to doctors have no clinical relevance, since when does that stop us, in fact, the fda does have a say in detail content and mva content so if we’d be pushing past supportable claims in we mentioned the products alleged attributes on TV they we’re doing same in details,” said another poster. Obviously, this rep does not know that FDA DOES have a say in detail content. I wonder if FDA reads CafePharma.

But the main complaint is how “amateurish” the ads are. “Hello? Anyone want to talk about the crap quality of the commercial too?” said a CafePharma poster. “It makes us look like a bunch of amateurs… no mention of the company (not that we need wonder why) and the damn army men are a joke. At least the Nasonex bee was memorable AND cheesy. This is forgettable and our Omnaris sales will be forgotten because of it. Nice quality agency we got ourselves.”

At least one commenter blamed the ad agency and claimed it was hired by friends within the company: “This is once again an example of the company hiring one of their friends or relatives’s agencies. There is no way a real ad agency designed that stupid commercial. this goes back to one of the main reason this company has done so poorly, you can not make this organization a vehical (sic) to help friends , return favors or other crooked schemes. you need to hire the best person for the job not your friend or a favor for a friend. An outside auditor should audit the contracting of that company and what relation that princiles (sic) of the ad agency and sepracor managemnt (sic) have.” 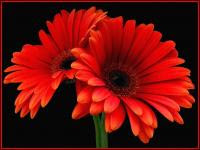 The new commercial appears almost as amateurish as the old ones. Near the end of the NEW commercial, after the woman snorts her dose of Omnaris, she exclaims “I can smell the roses again!” I think this is a reference to an unsubstantiated benefit claim mentioned by one CafePharma poster: Omnaris has “no smell” that can interfere with the joys of smelling the aroma of roses.

But there are NO roses in the commercial, only a bunch of red daisies in the planter outside the woman’s window! At least I think they were daisies — the flowers looked just like the ones shown here. They definitely were not roses!

Either this is a diabolically clever buzz marketing scheme or the ad agency couldn’t tell the difference between daisies and roses. Maybe the animators were not paid enough to create roses, so they created daisies instead (render one daisy petal, copy and paste to create an entire flower). Daisy, rose… same thing, right? I’m not an expert, but I don’t think daisies are known for their nice smell.

“Bottom line, the commercial WORKS,” said a CafePharma poster who sounded like he/she had some inside information. “Hits to the website are up 7 fold. Omnaris now has a higher brand recognition than Veramyst. It has a higher website generated coupon redemption rate than Veramyst. It has faster growth numbers.” That comment was made a year ago. Since the “Orkin man” style ads are still running, I assume they are still working.

FDA Will Apply the “Uncanny Valley” Hypothesis to Test the “Eeriness”...