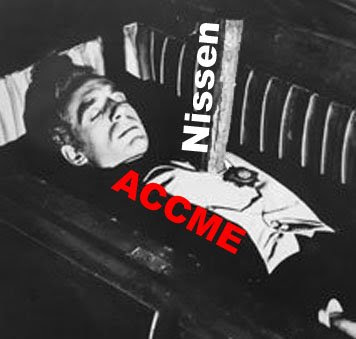 Senators Kohl, Martinez, and Franken heard from speakers who were pro and con regarding the benefits of industry-sponsored support of CME, which is waning (see “Pharma Shifts Support of CME from MECCs to Physician Societies“).

“With the billions of dollars of industry money flowing into CME, who is guarding the integrity of the CME process?,” asked Nissen. “Current oversight by the Accreditation Council for Continuing Medical Education (ACCME) is largely ineffective. The ACCME has strict rules governing educational activities, but appears uninterested or incapable of enforcing them. I am unaware of any communications companies that have lost their accreditation because of biased CME.”

“Maybe they don’t have resources, maybe they do not have the will,” said Nissen. “We need ACCME to go away.” He said that while Murray Kopelow, CEO of ACCME, was sitting in the same small room!

“In recent years, CME has been increasingly used to conceal payments to physicians that would otherwise be disclosed by transparency rules at hospitals and medical schools,” said Nissen. “Since the honorarium comes from a third party and is used to support CME, recipients are shielded from disclosure. Essentially, communications companies are used to ‘launder’ money to avoid disclosure.” Speaking of money laundering, maybe Nissen read my post on the subject: “Welcome to the CME Laundromat!“

Kopelow, in his testimony, did not mention any CME providers who have lost their accreditation due to violations, but he did mention many recent improvements in oversight implemented at ACCME. Providers, for example, have been put on “probation,” said Kopelow without describing what that meant. He also mentioned that “just this month,” ACCME made public those CME providers that accept pharma funding. Haven’t the cows left the barn by now? I mean many MECCs — commercial providers who are funded almost 100% by industry — have already gone out of business because of the cut in their funding (op cit).

[NOTE: Although I found a complete list of accredited providers on the ACCME site, I did not find a specific list of providers that accept industry funding that Kopelow mentioned. The list I did find, however, included “Provider Type” as one of the fields of the list. That tells me if the provider is non-profit, Publishing/Education company, or simply “Not Classified.” It does not tell me if the provider accepts industry funding (even non-profits can accept such funding), nor what percent of their CME programs are industry-funded. I sent ACCME an email (to “postermaster@accme.org”) asking them to send me that information. I suspect, however, like Nissen, I will never hear back from them. ADDENDUM: I DID hear back!

“Hi John, thank you for your inquiry. The list that you refer to will be posted by the end of August. It will include whether or not a provider accepts commercial support, but will not include information about the amount of commercial support received by an individual provider.” — Tamar Hosansky, Director of Communications, Accreditation Council for Continuing Medical Education]

Kopelow’s written testimony mentions applications for accreditation that failed and providers who were placed on probation:

Stossel suggested that improvements in medical care were a direct result of industry-funded CME. Fellow Tweeter @garyschwitzer tweeted Sen Franken’s comment on that: “Sen. Franken: it doesn’t follow that industry should fund CME just because medicine is better today than when we were kids.”

Stossel at one point in his testimony also said his “family members get the best information from commercial sources.” A senator — I forget who — wondered if Stossel meant direct-to-consumer (DTC) advertising, which was not the subject of the hearing. I guess he meant family members who were also doctors getting information from industry-funded CME. Whatever he meant, Sen Franken retorted: “You draw conclusions from stories. Accumulation of anecdotes that you quote don’t equal data.” Stossel did indeed resort to anecdotal evidence several times throughout his testimony.

The first two pages of Stossel’s written testimony just reviews the advances of medicine to treat diseases like heart failure, which he attributed to the drugs developed by commercial entities like pharmaceutical companies. This, of course, may be true, but Stossel failed to prove that industry-sponsored CME played a major role.

“Do the allegations concerning the parasitic and devious aspects of the medical products industry survive analytical scrutiny to justify concluding that conflict of interest degrades medical integrity?,” asked Stossel in his written testimony. “They do not,” he answered.

Stossel concluded his written testimony with “History has repeatedly demonstrated that top-down, central planning impedes innovation. Unless we resist the zealots driving conflict of interest regulations, progress will slow – and patients will suffer.”

I live Tweeted during the event. See Twitter hashtag #SenCME.

Fear and Loathing in Bethesda, MD