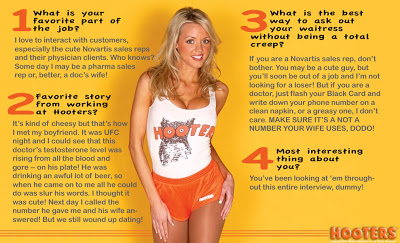 DOJ claims that Novartis violated the Anti-Kickback Statute by paying doctors to speak about certain drugs, including its hypertension drugs Lotrel and Valturna and its diabetes drug Starlix, at events that were often little or nothing more than social occasions for the doctors. The payments and lavish dinners given to the doctors were, in reality, kickbacks to the speakers and attendees to induce them to write prescriptions for Novartis drugs, says DOJ.

Many speaker programs were held in circumstances in which it would have been “virtually impossible for any presentation to be made, such as on fishing trips off the Florida coast,” the suit claims.

“Other Novartis events were held at Hooters restaurants.”

Stories like this are why I love my job! It’s a great excuse for me to Google images of Hooters’ girls — even with Mrs. Pharmaguy peering over my shoulder — to come up with the following interview of a Hooter’s Waitress of the Month who was present on several occasions when Novartis reps and their clients held “educational” events at her Hooters restaurant: