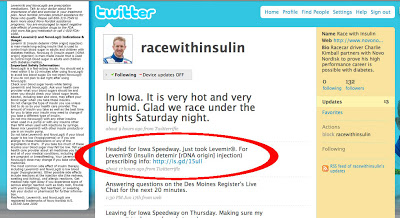 In this context — the racewithinsulin Twitter Web page — the branded Tweet appears on the same page that mentions the indication — diabetes — as well as the side effect, fair balance information; although the latter is written using a mouse-sized, barely readable text font.

However, most Twitter users — about 67% according to my estimates — do not use the Web to post or view Tweets. Most of us use third-party applications like Tweetie, TweetDeck, Nambu, and Twitterfeed to view and organize Tweets. The variety of ways by which Twitter can be accessed other than through the Web and cell phones is why the Iranian government has not been able to stop Iranians from using Twitter to reach out to the world.

Ross hopes this Tweet represents a “‘safe’ (and hopefully FDA friendly) approach.” This prompted me to take a FDA inspector’s view of the Tweet.

On first glance, this looks similar to the Google Adwords cited by FDA in the infamous 14 letters it sent to pharmaceutical companies back in April (see “The 14 Letters. Who at the FDA Knew What and When?“).

However, PhRMA’s DTC Advertising Guiding Principles preclude this kind of ad on TV: “DTC television advertising that identifies a product by name should clearly state the health conditions for which the medicine is approved and the major risks associated with the medicine being advertised.”

Unfortunately, like the FDA, PhRMA has not gotten around to developing Guiding Principles for Social Media DTC Advertising.

A reminder ad of any sort — whether in print, TV, Web, or Twitter — is, IMHO, a form of spam. I consider, therefore, Kimball’s unabashed product endorsement Tweet a particularly sleazy example of Twitter spam. We certainly do NOT want to see more Tweets like this and I disagree with Ross; I sincerely hope that this Tweet is NOT used as a “model” for other drug companies who want to adopt Twitter as a marketing vehicle.

P.S. Aside from the sleaze aspect, this promo missed an opportunity to educate readers about Levemir. Instead of linking to the product Web site, where you can find some useful information, it links directly to the PDF version of the package insert (PI), a technical document suitable for physicians but not for consumers, which comprise most of Kimball’s “huge” audience of 128 followers, none of whom is likely to read the Tweet or the PI it links to!