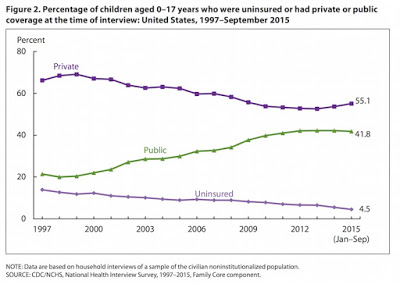 As reported by STAT Morning Rounds:

“The number of people without health insurance in the US has continued to tumble: In the first nine months of 2015, just 9.1 percent of people didn’t have coverage. That means there are 16 million fewer uninsured people than in 2013, according to new data from the CDC. One group that’s seeing a big boost: children. The share of kids without insurance has dropped to just 4.5 percent, from 14 percent in 1997.”

Aside from these children (and adults), who has benefited from Obamacare?

Answer: Insurance companies and the pharmaceutical industry have benefited from Obamacare because millions more people have bought health insurance and can afford their medicines. Counteracting that, however, is the collusion between these two industries to raise drug prices and jack up the deductibles insured patients must pay!

Pharma Digital Investment is Increasing, But Still Only 3-6% of the...