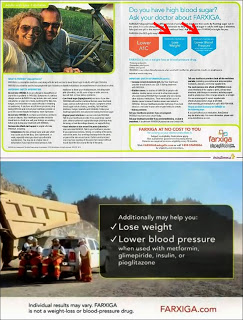 Usually, pharmaceutical companies are accused of promoting drugs “off-label” to physicians, which is understandable because it is perfectly legal for physicians to prescribe drugs for so-called off-label use.

The FDA rarely cites off-label or “unapproved use” claims made in DTC ads. None of the letters issued by FDA in 2014 mentioned that violation. Historically (between 2004 and 2013), only 4% of violations cited in FDA letters were concerned with off-label/unapproved use promotion and no TV ad received such a letter (see here).

Public Citizen includes a Farxiga ad that “touts” weight loss and blood pressure reduction as potential benefits although the drug has not been approved for those indications (see the ad in the above figure; also included is a screen from the TV ad).

“These five drugs have been approved solely to lower hemoglobin A1C levels in patients with Type 2 diabetes,” says Public Citizen, “but the advertisements presented in this letter clearly convey the false perception to patients and doctors that the drugs have been deemed safe and effective for weight loss and/or reducing blood pressure.”

Public Citizen wonders if the FDA approved the ads and asks a couple of interesting questions in light of the recent paucity of warning letters issued by the FDA (read “Banging Year for Drug Approvals, Wimpy Year for Enforcement Actions”).

Meanwhile, reports Pharmalot, the pharmaceutical industry would like the FDA to go still further and allow drug makers to distribute new information about the effectiveness of their medicines. “To date, FDA has not taken a similarly flexible approach to dissemination of information about efficacy of approved products,” said PhRMA in comments to the FDA.

Did Pharma Really Spend $3 Billion on Internet Advertising in 2015?