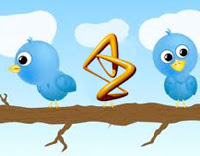 There were a few attempts by two or three “malcontents” to “hijack” the conversation as I warned about in a previous blog post (here). But despite their attempts to ask “the tough questions” about off-label promotion of drugs and Seroquel side effects, everyone completely ignored the hijackers and the conversation continued as if these people were not even there. [Perhaps there should be Twitter chats on these other topics. Pharma companies will not host these, but patient advocates can and should invite pharma people to listen at least.]

Unfortunately, the way influence is measured in social media such as Twitter, those people who make the most posts — even if those posts are irrelevant to the discussion and ignored — get the highest ratings. “What the Hashtag,” for example, creates a list of “Top Contributors,” which is a misnomer because the top two “contributors” (see figure below; click on it for enlarged view) are the “malcontents” who contributed nothing of value to the conversation.

What the Hashtag Chart: See here.

The data shows that there were 144 other contributors who actually contributed to the conversation. It’s impossible to know how many “lurkers” were listening without contributing.

One thing is clear: AstraZenecaUS did not pick up very many new Twitter followers as a result of the chat. Before the chat it had 4,715 followers and afterward (this morning) it had 4,758 followers. There were signs, however, that AZ met some people and organizations in the chat that they will team up with in the future.

So, it’s not all about the numbers when you measure the ROI of a Twitter chat!

AZ’s goal — I believe — was to get answers to some specific questions such as the following:

“What is best way to increase awareness of prescription savings programs?”

“[Are there] Any pilot programs to drive adherence among uninsured?”

“Are people aware of our healthcare facilities program?”

“Top 3 suggestions for reaching eligible patients? Think outside the box…”

“[Any] Ideas on reaching caregivers of seniors?”

“With health care reform covering millions more, what will demand be for #rxsave”

“Anybody using text messages with patients?”

AZ received some good input and answers to those question, which you can find yourself by reading the transcript.

AZ also provide some nuggets of information, such as:

“AZ&Me Rx savings programs saw 7% increase in patients helped in 2010 over 2009. What are advocates seeing?”

More pharma-sponsored Twitter chats are on the way. Near the end of the one-hour chat #rxsave session, AZ asked “Was this chat of value to you and should pharma do more of them?” To which I answered: “Definitely, pharma shld do more Twitter chats. U proved that it can work despite hijack attempts!” My opinion was shared by several others who participated in the session. AZ had this to say about that:

“re next tweet chats @soulflsepulcher will we host one? let’s see how this goes – and how FDA guidance on social media turns out”

Maybe FDA was “lurking” and will issue some guidance by warning letter.

Listen to My Interview of AstraZeneca’s Tony Jewell: